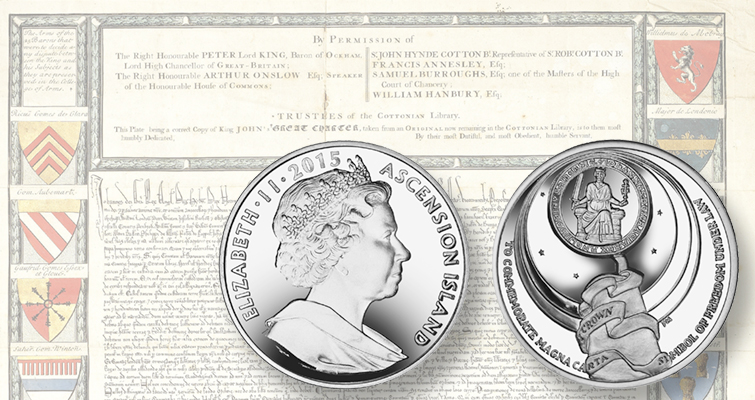 The Pobjoy Mint has issued a “dished” coin for the Ascension Islands to mark the 800th anniversary of the Magna Carta.

To celebrate the 800th anniversary of the Magna Carta, the Pobjoy Mint has issued a convex commemorative coin on behalf of the Ascension Island government.

The reverse design is based on the domed memorial at Runnymede in England that contains a pillar of English granite upon which is inscribed ‘To commemorate the Magna Carta, symbol of Freedom under Law.” The Proof .925 fine silver crown has been produced as a “partially dished” coin to replicate the domed roof of the memorial, according to the Pobjoy Mint. The reverse is convex but the obverse is flat and not concave.

The design is also available in a standard flat Uncirculated copper-nickel version.

The domed roof showing the stars can be seen with the central pillar leading down. King John’s original seal is shown within the roof with a ribbon curling down the pillar.

The Magna Carta is one of the most well-known documents in English history. It was not meant to be a lasting declaration of legal principle but was a practical solution to a political crisis that served the interests of the barons of the time by reasserting the power of custom to limit the tyrannical behavior of King John.

The document was written on parchment, the standard writing material at the time. It was authenticated with the Great Seal of King John.

Three of the four surviving copies of the Magna Carta have lost their wax seals over the centuries. It was sealed on June 15, 1215, under oath by King John at Runnymede on the bank of the River Thames near Windsor.

Only three of the original clauses in the Magna Carta are still law: the Freedom of the English Church, the Ancient Liberties of the City of London, and the third and most important one that “No Freeman shall be taken or imprisoned, or be disseised of his Freehold, or Liberties, or free Customs, or be outlawed, or exiled, or any other wise destroyed; nor will we not pass on him, nor condemn him, but by lawful judgement of his Peers, or by the Law of the Land. We will sell to no man, we will not defer to any man either Justice or Right,” — in essence, everyone has the right to a fair trial.

This last clause was given no prominence at the time but its adaptability has allowed following generations to interpret it. In the 14th century, Parliament saw it as guaranteeing trial by jury and it has resonant echoes in the American Bill of Rights and the Universal Declaration of Human Rights.

Only four examples of the original 1215 text remain, all of which are located in England. This year all four surviving copies were brought together to celebrate the anniversary.

Both versions of the coin weigh 28.28 grams and measure 38.6 millimeters in diameter.

The copper-nickel crown has an unlimited mintage and retails for $16.95.

To order, or for more information, visit the firm's website. 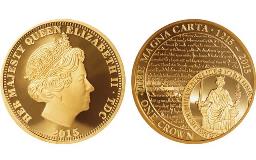 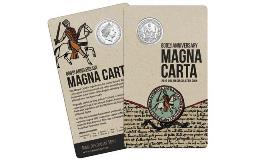 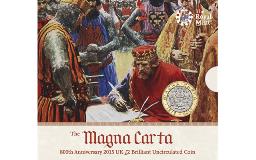