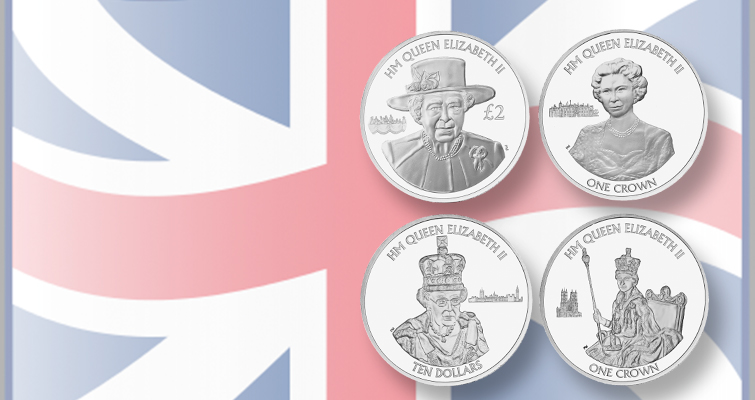 A historic reign more than 63 years in the making is the subject of four new coins from the Pobjoy Mint.

The firm announced Sept. 16 that it was releasing a series of coins from four different overseas territories to commemorate Queen Elizabeth II’s Sept. 9 historical milestone, when she became the longest-reigning British monarch.

The monarch broke the previous record that had been established by her great-great-grandmother Queen Victoria.

Queen Victoria came to the throne aged 18 and died in 1901 when she was 81. Buckingham Palace representatives calculated that Queen Victoria reigned for 23,226 days, 16 hours and 23 minutes, a record that is now surpassed.

Queen Elizabeth II is already in the record books for becoming the longest-living British monarch and, according to the Guinness Book of World Records, she also holds the world record for most currencies featuring the same individual.

Each of the four nations has issued a distinct portrait on its coins, which also feature a privy mark related to the distinct design.

The crown coins for Ascension Island depict a 1957 portrait from the queen’s first televised Christmas message. The privy mark, an image of Sandringham, represents the place from where the message was televised.

The copper-nickel dollar and silver $10 coins from the British Virgin Islands carry a 2012 portrait from the State Opening of Parliament and a privy mark showing the Houses of Parliament.

A 1953 portrait taken during the queen’s coronation appears on the crown coins from the Falkland Islands, alongside a privy mark of Westminster Abbey where the coronation occurred.

The £2 coins from South Georgia & South Sandwich Islands bear a 2011 portrait of Queen Elizabeth II taken from the Duke & Duchess of Cambridge’s wedding, accompanied by a privy mark of the balcony at Buckingham Palace where the couple enjoyed a famous kiss after being presented to the public.

All of the coins measure 38.6 millimeters in diameter and weigh 28.28 grams.

The Uncirculated coins have an unlimited mintage and each retails for $16.95.

The Proof coins are limited to a mintage of 10,000 pieces per design and each retails for $89.

To order, or for more information, visit the firm’s website.