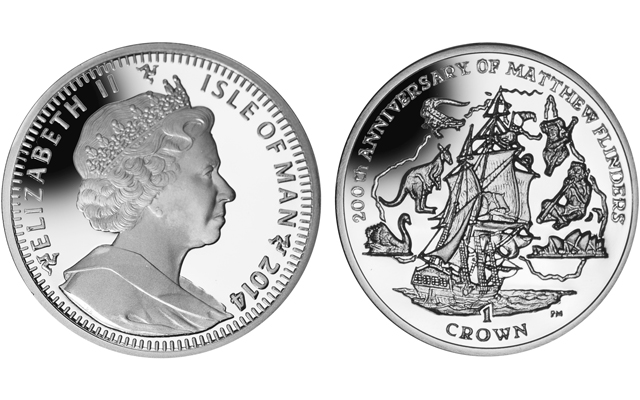 A new coin from the Isle of Man commemorates the 200th anniversary of explorer Matthew Flinders’ publication of the first atlas to depict Terra Australia, or Australia.

The Pobjoy Mint has issued a new coin on behalf of the Isle of Man, which celebrates the 200th anniversary of Matthew Flinders’ publication of the first atlas to include Australia.

Capt. Matthew Flinders was a distinguished English navigator and cartographer who was the first to circumnavigate Australia and to identify it as a continent. He was also the first to have his atlas of maps of Australia published.

Born in March 1774, Flinders made three voyages to the southern ocean. During the second voyage it was confirmed that Van Diemen’s Land, which is now Tasmania, was an island. After this voyage Flinders' work came to the attention of Sir Joseph Banks and as a result, in January 1801, Flinders was given command of the HMS Investigator and promoted to Commander the following month.

Aboard the Investigator, Flinders started his exploration of the Australian coastline and proceeded around the coastline drawing up his maps as he went. After his return to England, Flinder’s map of "Terra Australia" was first published in January 1814. Revered in Australia and acknowledged as one of the greatest navigators in history, he died 200 years ago in 1814 at the age of 40, the day after the book and atlas were published.

The HMS Investigator and a map of Australia appear on the reverse of the new coins, surrounded by iconic images that represent Australia. These include a koala, kangaroo and the Sydney Opera House.

The 1-crown coin is available in either Uncirculated copper-nickel or Proof .925 fine silver versions; the Proof examples are struck four times and feature “frosted high relief sculpting against a mirror brilliant background,” according to the Pobjoy Mint. Both coins weigh 28.28 grams and measure 38.6 millimeters in diameter.

For more information or to order the coins, visit the website www.pobjoy.com or telephone the Pobjoy Mint at 877-476-2569.