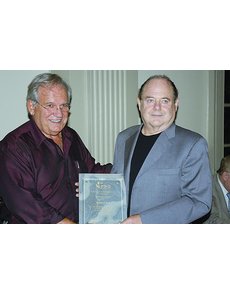 The PNG’s Sol Kaplan Award for helping to rid the profession of fraud and thievery was jointly presented to Chicago dealers Harlan J. Berk, shown at right, and Dennis J. Forgue, not shown. Making the presentation is PNG Executive Director Robert Brueggeman, left. 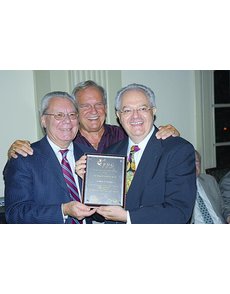 The Robert Friedberg Award, for an outstanding book or other literature was presented to Anthony J. Swiatek, right, for his book Encyclopedia of the Commemorative Coins of the United States. Making the presentation are Robert Brueggeman, center, and James A. Simek, left, of the PNG Board. 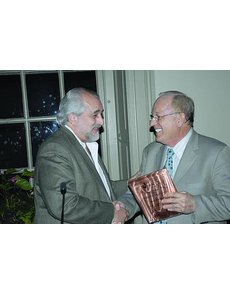 Dealer Barry S. Stuppler, right. receives the PNG’s Significant Contribution Award for years of dedication and significant contributions to numismatics. Making the presentation is Fred Weinberg of the PNG. 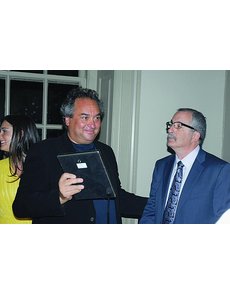 The award was presented at the PNG Day awards banquet on the eve of the American Numismatic Association World’s Fair of Money.

Lipton has been a PNG member since 1987.

In presenting the award, Richard Weaver, a member of the PNG’s board of directors, noted that Lipton started buying and selling coins at the age of 13. By 17, Lipton had established himself as one of the major players in the rare coin market, according to PNG. Lipton received the PNG’s Sol Kaplan Award in 2000 for his work in helping to fight fraud and thievery in numismatics.

This year’s Sol Kaplan Award for helping to rid the profession of fraud and thievery was jointly presented to Chicago dealers Harlan J. Berk and Dennis J. Forgue.

“Harlan and Dennis helped the Polish Museum of America in Chicago recover 300 rare, historic documents stolen from the museum,” said PNG Executive Director Robert Brueggeman, who presented the award to Berk and Forgue. “These documents, including letters signed by George Washington and Thomas Jefferson, have a combined value of about $5 million. One of the recovered items is a four-page letter written by Jefferson in 1814 about his recommendations on how to finance the U.S. government. Harlan Berk and Dennis Forgue were able to recover 279 documents that were offered for sale to them by suspects in the case.

“In addition, their diligent work directly led to the museum and the FBI in recovering the remaining 121 stolen documents and the apprehension of suspects,” Brueggeman said.

Woodland Hills, Calif., dealer Barry S. Stuppler received the PNG’s Significant Contribution Award for years of dedication and significant contributions to numismatics. Stuppler served as the ANA president from 2007 to 2009, and now is president of the California Coin and Bullion Merchants Association and the Gold & Silver Political Action Committee.

The award was presented by PNG Treasurer Fred Weinberg for Stuppler’s “years of dedication and significant contributions to numismatics.”

The Abe Kosoff Founders Award, named after the PNG’s founding president, was presented to New Jersey dealer John Albanese for his enthusiastic leadership and steadfast dedication to the entire numismatic community. The award was jointly presented by Stuppler and Dana S. Samuelson, PNG secretary.

PNG Board Member James A. Simek presented the Robert Friedberg Award, for an outstanding book or other literature, to Anthony J. Swiatek for his book Encyclopedia of the Commemorative Coins of the United States, published by KWS Publishers.

PNG Board Member Paul Montgomery and PNG member Donald Kagin announced that former PNG President Edward Milas, who passed away on Dec. 17, was posthumously receiving the Art Kagin Ambassador Award for distinguished service as an advocate of numismatic goodwill.

For additional information about the awards for the PNG, contact Robert Brueggeman, PNG Executive Director, 28441 Rancho California Road, Suite 106, Temecula, CA 92590. Telephone the PNG at 951-587-8300 or email the group at info@pngdealers.com. ■