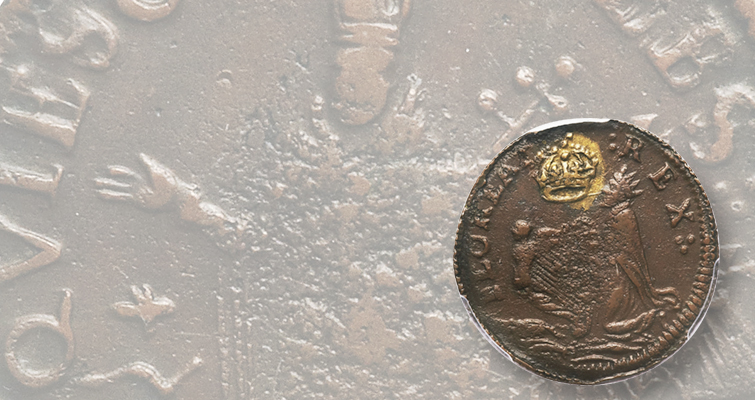 Plugs were used to accent a decorative element on 17th century St. Patrick farthings, shown, give full value to 1792 cents, and adjust the silver content of half dollars and silver dollars in the 1790s. 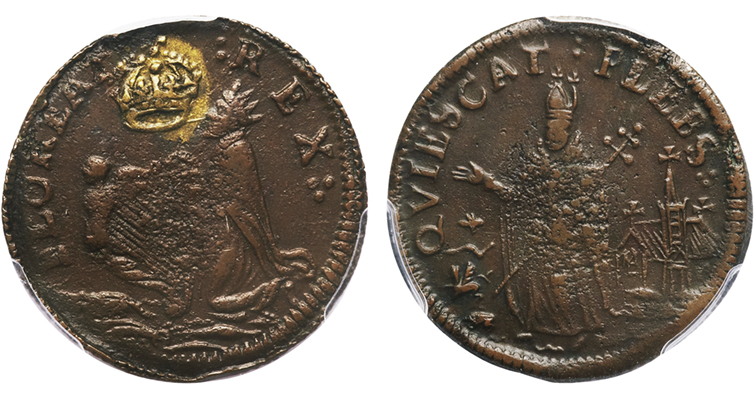 The crown on this Professional Coin Grading Service About Uncirculated 55 St. Patrick farthing is highlighted by a brass plug.

Collectors have no use for plugged nickels, but plugged farthings, half pennies, cents, half dollars and dollars are another matter.

Plugs were used to accent a decorative element on 17th century St. Patrick farthings, give full value to 1792 cents, and adjust the silver content of half dollars and silver dollars in the 1790s.

In 1681 Irish emigrant Mark Newby brought privately struck copper farthings and half pennies with him to New Jersey. The next year, the colony’s general assembly authorized the coins’ circulation.

Both denominations depict a kneeling king playing a harp on the obverse and St. Patrick driving out the snakes on the reverse. A crown appears on the obverse to the left and above the musical king. Most of the coins have a brass plug at the crown’s location, highlighting the decorative element. The plug, too, functions as a counterfeit deterrent.

In 1792 when the fledgling U.S. Mint was preparing to commence striking the nation’s coinage, the Mint experimented with a small cent that still contained its full value in metal. The resultant piece was a dime-size disk of copper with a silver plug in the center. Three-fourths of the cent’s value was in the silver center. When cent production began in 1793, the cent was all copper nearly the size of a half dollar. Some 14 1792 Silver Center cents are known to collectors. In January, an Extremely Fine example with a CAC sticker sold for $470,000.

In the late 18th century, the Mint had a difficult time getting it right. Overweight coins cost the government money and underweight ones cheated merchants. The Mint went to great lengths to produce coins within the Mint’s narrow tolerance.

In 1794 and 1795 the Mint addressed the problem of underweight planchets with an involved scheme that involved drilling a hole in the center of the lightweight planchet and inserting a plug to bring the blank up to proper weight. When struck, the plug spread out over the surface of one or both sides. The Neil/Carter 1794 dollar, which many believe to be the first silver dollar minted, was struck on a plugged planchet. That coin sold for $10 million in 2013.

Fewer than 100 plugged 1795 dollars and only a handful of plugged 1795 half dollars are believed to exist. Plugged examples command a considerable premium, with plugged dollars typically fetching double the price of nonplugged ones at auction.