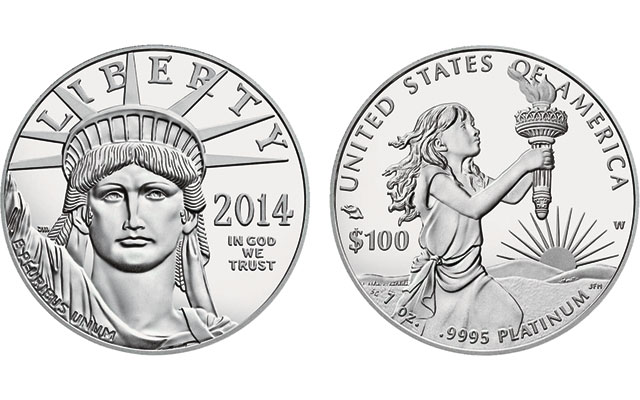 A depiction of a young Lady Liberty carrying her torch, symbolizing the hope and promise of America, is depicted on the reverse of the Proof 2014-W American Eagle platinum $100 coin.

The reverse of the .9995 fine platinum coin reflects the sixth and final coin in a series bearing reverse designs thematic to the ideals of the Preamable to the U.S. Constitution.

The themes were developed by John Roberts, chief justice of the United States.

Pricing for the coin will be posted on the U.S. Mint’s website closer to the release date.

The pricing is based on the Mint’s pricing grid for coins containing precious metals found online.

To Secure The Blessings

The 2014 reverse design is thematic of the premise, “To Secure the Blessings of Liberty to Ourselves and Our Posterity.”

The design features a young Lady Liberty carrying her torch, symbolizing the hope and promise of America.

The design was created by Susan Gamble, an artist with the U.S. Mint’s Artistic Infusion Program, and sculptured by U.S. Mint Medallic Sculptor Joseph F. Menna.

The obverse design, showing the face of the Statue of Liberty, common to the platinum Proof and bullion coins since the introduction of the platinum American Eagle series in 1997, is the work of then U.S. Mint Sculptor-Engraver John Mercanti.