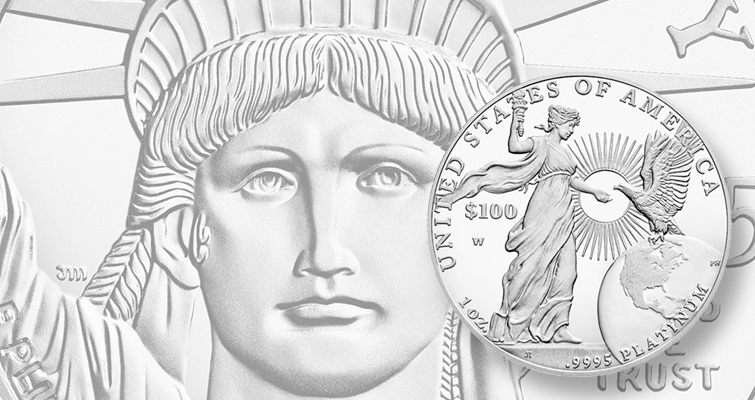 Production of collector and investor versions of the 2015 American Eagle platinum coin could be further delayed if sufficient planchets cannot be secured. Illustrated is the approved reverse for the Proof 2015-W version. 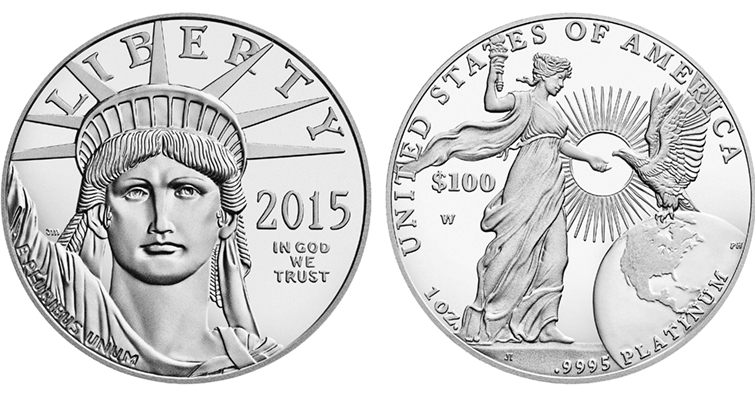 The Statue of Liberty obverse introduced on platinum American Eagles in 1997 has appeared on all versions of the platinum coins since then. 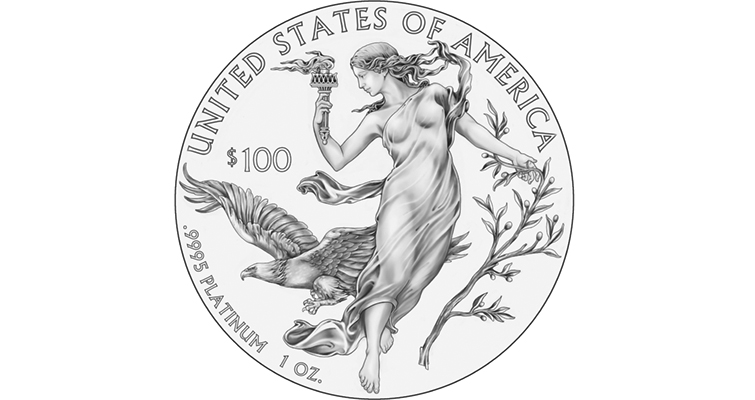 While final designs have been approved for the reverses of the Proof 2015 and 2016 American Eagle platinum $100 coins, it is possible that 2015 production of both the Proof collector coins and investor bullion coins could be delayed if sufficient planchets can’t be secured.

No release date has been announced for either the Proof 2015 coin or the bullion version struck for investors.

“The Mint has a clear commitment to manufacturing and offering quality products,” Tom Jurkowsky, director of the U.S. Mint’s Office of Corporate Communications, told Coin World Sept. 18. “This commitment will not, and cannot, be compromised.

“We must also ensure we have a good supply of platinum to meet anticipated demand."

The approved reverse designs for the Proof 2015 and 2016 American Eagle 1-ounce platinum coins were released by the U.S. Mint on Sept. 18.

The 2015 and 2016 designs will bear designs emblematic of the Mint’s two-year Torches of Freedom program. The coins feature depictions of Lady Liberty with a torch symbolizing freedom.

At its Sept, 18, 2014, meeting, the Commission of Fine Arts had recommended designs depicting eagles. Those designs were not selected by Treasury.

The reverse designs will be paired with John Mercanti’s Statue of Liberty obverse portrait introduced on the  American Eagle platinum bullion coins in 1997.

The reverse of the 2016 adopted design is the work of AIP artist Paul C. Balan. U.S. Mint Medallic Sculptor Joseph F. Menna has been designated to sculpture Balan's design.

Balan’s design depicts Liberty with flowing hair and robe waving in the winds of freedom. She holds a torch of enlightenment in her right hand and an olive branch in her left hand to symbolize peace. Thirteen olives are included on the olive branch to represent the 13 Original Colonies. The design includes a bald eagle with its wings outstretched, representing its boundless spirit, according to the Mint’s narrative.

Rhett Jeppson, principal deputy director of the Mint and nominated by President Obama to become Mint director, told Coin World during an interview in August that the Mint plans to offer the investor version — the American Eagle 1-ounce platinum bullion coin — sometime between Oct. 1 and Dec. 31.

2014’s production was the first time the Mint struck an American Eagle platinum bullion coin since 2008. Proof versions, however, have been issued annually since 1997.

Inability to obtain a sufficient supply of planchets could affect production of both the 1-ounce Proof and bullion platinum American Eagles.

“We were very happy to provide this product to our Authorized Purchasers as they told us there was a market for these coins,” Jurkowsky said. “As the program moved forward to 2015, the Mint felt it was important to expand our base of suppliers of platinum for both our bullion and numismatic products — while also ensuring we continued to bring the highest quality coins to market. Adding new suppliers, however, requires testing, reviewing and approving samples — as well as validating full production capabilities of potential new suppliers.

“This validation is ongoing, and we hope this process will be completed in the near future.

“This would allow us to provide platinum bullion and numismatic products before the end of the year.”

However, Gold Corp. is not scheduled to provide platinum planchets for the American Eagle coins in 2015, Jurkowsky said.

Planchets are to be provided by Sunshine Minting in Coeur d’Alene, Idaho, and Sigmund Cohn Corp. in Mt. Vernon, N.Y.