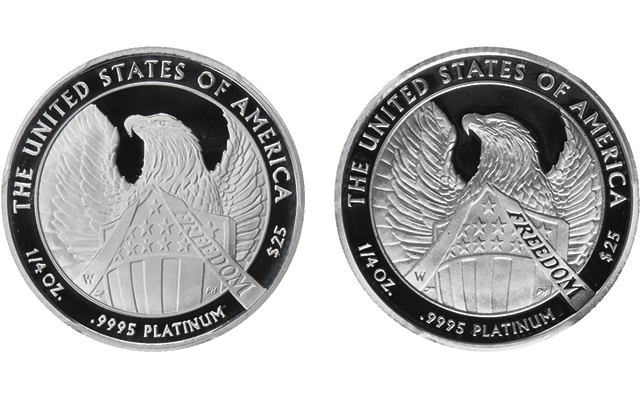 The only Proof 2007-W American Eagle platinum $25 coin with Frosted FREEDOM to appear at auction, above left, brought $69,300 in an online sale that closed April 27 by GreatCollections. Above right is an example bearing FREEDOM with the approved mirrored Proof finish on the lettering.

A Proof 2007-W American Eagle quarter-ounce platinum $25 coin confirmed as struck with a reverse inscription frosted instead of mirrored realized $69,300 in a GreatCollections LLC online auction that closed April 27.

The piece just sold is an early version of the coin struck by the West Point Mint, and was not intended to be released after a change in finish was made.

The price realized includes the 10 percent buyer’s fee added to the final closing price. The coin was sold without reserve.

Bidding fast and furious at end

Bidding for the auction opened on March 31 with the opening bid of $1.

On April 27, with just less than six minutes remaining in the auction, the bid was at $40,000, with 65 bids having been placed by 11 unique bidders.

Ian Russell, president and founder of GreatCollections LLC, said April 28 that the winning bidder is an advanced collector.

Russell said he anticipated that the coin would generate significant collector interest.

What Russell believes helped fuel that interest was the U.S. Mint’s confirmation of the variation’s creation and the numbers involved.

Russell suggests that anyone who purchased a Proof quarter-ounce platinum American Eagle either as a single coin or as part of a four-coin platinum Proof set should check for the variant.

The Proof 2007-W American Eagle platinum $25 coin has the word FREEDOM in frosted type across the ribbon draped on the shield, rather than having the same word in the finally approved mirror finish.

During initial testing of dies for the designs, in reviewing struck coin examples, U.S. Mint officials did not believe the word FREEDOM was prominent enough when it was frosted. A decision was then made, just before regular production began, to change the finish of the letters to the mirror finish.

However, an unknown number of the early strikes were accidentally used to fill orders for Mint customers.

The first example of one of the early strikes was discovered in 2011 and prompted the U.S. Mint to confirm that up to 21 of the coins were produced, each, in the $25 quarter-ounce and $50 half-ounce sizes. Twelve variant coins were produced of the $100 1-ounce coins.

GreatCollections said it first learned about this current coin earlier this year, and it is the only coin graded by PCGS for any the three denominations.

PCGS included the quarter-ounce frosted FREEDOM coin in its Top 100 Modern Coins Registry Set, where it is ranked No. 16.

In contrast to the $69,300 paid for the Frosted FREEDOM coin, a PCGS Proof 70 Deep Cameo example of the common 2007-W American Eagle platinum quarter-ounce coin with mirrored FREEDOM reverse sold for $764.75 in a March 23, 2014, sale by Heritage Auctions.