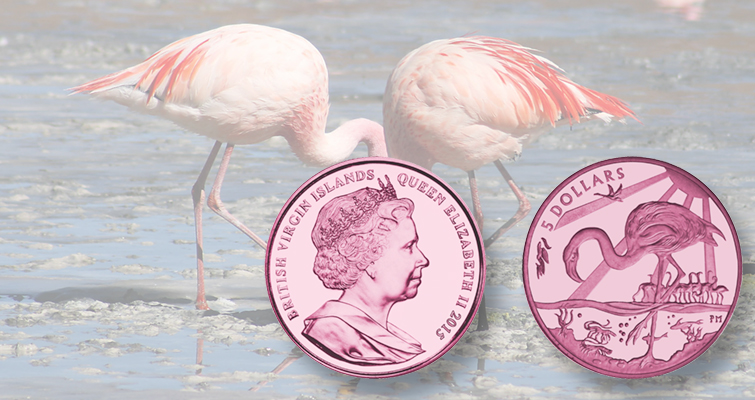 A new color is appearing in the Pobjoy Mint’s colored titanium coin series.

The Pobjoy Mint on Aug. 21 announced the release of a pink titanium $5 coin on behalf of the British Virgin Islands government. The coin, appropriately, showcases the Flamingo, the wading bird famous for its bright pink feathers, stilt-like legs and S-shaped neck.

Flamingos filter feed on brine shrimp and blue-green algae, and the carotenoids in that diet produce the birds' unique color.

Flamingos often stand on one leg, the other leg tucked beneath the body. Research indicates that standing on one leg may allow the birds to conserve more body heat, given that they spend a significant amount of time wading in cold water. Flamingos are very social birds and live in colonies whose population can number in the thousands. These large colonies are believed to serve three purposes: avoiding predators, maximizing food intake and using scarce nesting sites more efficiently.

The coin’s reverse design features a flamingo wading in shallow water, with the underwater scene including shrimp and small fish, and with a flock of flamingos and the sun in the background.

Titanium is exceptionally difficult to strike and the Pobjoy Mint acknowledges that no two Titanium coins are exactly the same. A lined effect present on the coins is also unique to titanium.

In addition to the pink titanium $5 coin, the Pobjoy Mint has issued an Uncirculated copper-nickel $1 and Proof .925 fine (sterling) silver $10 version of the flamingo design.

The titanium version weighs 10 grams and measures 36.1 millimeters in diameter. It has a mintage limit of 5,000 pieces and retails for $69.

The copper-nickel $1 and Proof silver $10 coins each weigh 28.28 grams and measure 38.6 millimeters in diameter.

To order any of these coins, visit the Pobjoy Mint website.

Want to collect other titanium coins? Check out these related Coin World stories!