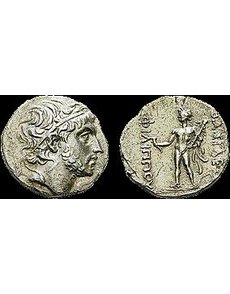 The fourth known silver drachm of Philip VI Andriscus highlights A. Tkalec AG’s Feb. 29 auction in Zurich. In About Extremely Fine condition, the coin has an opening bid of 12,000 Swiss francs (about $13,161 U.S.).

The fourth known example of a silver drachm of Philip VI Andriscus (or Andriskos), the last king of Macedon, highlights Zurich-based A. Tkalec AG’s Feb. 29 auction.

The coin, dating to circa 149 to 148 B.C., is an artifact from the man who provoked a rebellion against the Romans after the downfall of the Macedonian Empire.

In 168 B.C., the Romans invaded Macedonia and overthrew the king, Perseus, in the first Battle of Pydna. In 149 B.C., Andriskos, claiming to be the son of Perseus and Laodike, announced his intention to retake Macedonia from the Romans.

He traveled to Syria to request military help from Demetrius Soter of Syria. Demetrius instead handed him over to the Romans. Andriskos escaped from Roman captivity and raised a small but powerful Thracian army, invading Macedonia and successfully defeating the Romans in 149 B.C.

In 148 B.C., Andriskos conquered Thessaly. In the same year, during what the Romans called the fourth Macedonian War, he was defeated by the Romans at the second Battle of Pydna, and fled to Thrace, whose prince gave him up to Rome. After this Macedonia was formally reduced to a Roman province.

Coins of Andriskos are extremely rare, and this silver drachm is the fourth known. It enters the market for at least the sixth time since surfacing in a 1999 Lanz auction; it has since been offered in two separate Classical Numismatic Group auctions, a sale by Harlan Berk and another auction by Tkalec.

Weighing 4.23 grams and measuring 20 millimeters, the coin features a diademed head of Andriskos on the obverse and Herakles in a lion’s skin on the reverse.

The silver drachm of Andriskos is one of 308 lots of Celtic, Greek, Roman Provincial, Roman Imperial and Byzantine coins in the firm’s auction, which is dubbed “Coins of the Finest Quality – 1500 Years of the Art of Coinage.”

Live bidding is available but requires registration at least 48 hours prior to the auction.

PDFs of the catalog may be downloaded at www.coinstkalec.ch/home/AuctionAZ.aspx, and lot listings are found at www.eauctions.ch/PublicAuction/PABuying.aspx.