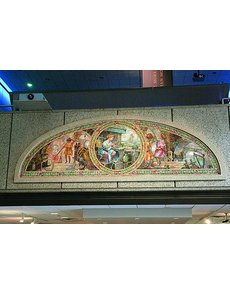 The lobby of the Fourth Philadelphia Mint has mounted on its walls seven glass mosaic panels, including the one shown, executed under the direction of Louis B. Tiffany for display at the Third Philadelphia Mint on Spring Garden Street upon its opening in 1901. The panels depict ancient Roman coining methods. 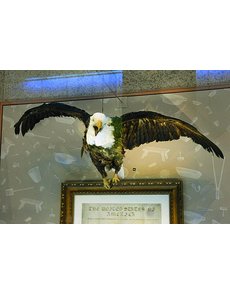 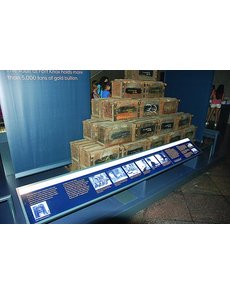 Among the sights on the Philadelphia Mint tour is an exhibit tracing the history of the Fort Knox Bullion Depository, which includes New York Assay Office boxes used to transport bullion. 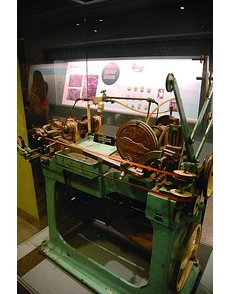 This is the original Janvier reducing lathe introduced at the Philadelphia Mint in 1907 to cut the master dies from galvano models for the Saint-Gaudens gold coinage.

Collectors planning a visit to the Philadelphia Mint will be treated to a newly renovated, and still free, self-guided tour that traces the U.S. Mint’s 220-year coinage history from 1792 to the present.

The tour area and visitors’ center was reopened to the public July 3 after a more than six-month, $3.9 million renovation executed by Quatrefoil of Laurel, Md. The tour includes exhibits showcasing an assemblage of the facility’s “heritage assets” of historical artifacts, tracing design, engraving and production techniques.

Visitors may also experience a view, from 40 feet above, of the production floor of the Philadelphia Mint, where they can watch coins being struck for circulation. Touch pads positioned in front of the viewing windows allow visitors to access still images and video clips of close-up operations as though they were right on the production floor.

The renovations were completed in advance of the Aug. 7 to 11 American Numismatic Association World’s Fair of Money in Philadelphia. Tour hours were extended on the show dates to allow more show visitors to take the Mint tour.

The general footprint of the areas for the tour and exhibits remains the same as before the renovation.

The lobby of the Fourth Philadelphia Mint has mounted on its walls seven glass mosaic panels — two oblong and five round — executed under the direction of Louis B. Tiffany for display at the Third Philadelphia Mint on Spring Garden Street upon its opening in 1901.

The glass mosaics were removed from the Third Philadelphia Mint for permanent display beginning in June 1971 at the Fourth Mint. The newer facility, located at Fifth and Arch streets, opened in 1969.

All of the glass panels underwent conservation and cleaning, according to Abbie Chessler, Quatrefoil’s co-founding partner and head of design.

Also on the first-floor, off the lobby, but underneath the second-floor mezzanine exhibit area, is the sales center and gift shop.

The sales center was redesigned by Buffalo, N.Y.-based Thinking Outside the Square, found online at www.thinkoutsidethesquare.com/.

The mezzanine’s David Rittenhouse Theater, named after the U.S. Mint’s first director, invites visitors to view a video chronicling the establishment of the U.S. Mint and the nation’s monetary system through the passage of the Mint Act of April 2, 1792.

Mezzanine displays include the stuffed American bald eagle, Peter, who lived at the Philadelphia Mint circa 1830 to 1836 and was let out each night to fly around the city of Philadelphia. Peter died when one of his wings was irreparably damaged after being caught in the flywheel of a coinage press on which he had perched.

Peter is said to have been Engraver Christian Gobrecht’s model for the silver dollars from 1836 through 1839.

On the wall next to the eagle exhibit are two paintings: the 1914 painting Ye Olde Mint by Edwin Lamasure Jr., representing his conception of the first Mint facility in 1792; and John Ward Dunsmore’s 1915 artwork supposedly depicting George Washington, his wife, Martha, and other federal officials, including Rittenhouse, inspecting a tray of coins held by Henry Voigt, first chief coiner and superintendent.

Among the enclosed exhibits on view in the new tour area are the models used for the 1907 gold coinage designed by sculptor Augustus Saint-Gaudens.

Also on view is a display of wooden boxes from the New York Assay Office used for shipping bullion. The boxes are part of an exhibit outlining the history of the Fort Knox Bullion Depository in Kentucky, where more than 5,000 tons of the nation’s gold reserves are stored.

The walls and floor space of the corridors of the extensive third-floor gallery contribute to an understanding, through interactive exhibits, of how coins and medals are made.

For coin production, the exhibits trace the operations from design conception and execution (the U.S. Mint’s engraving staff is based at the Philadelphia Mint, augmented by outside artists from the Mint’s Artistic Infusion Program); to die making, blanking, annealing and upsetting (softening through heat and then forming a raised rim), striking, inspection and bagging.

Examples of blanks, dies, models and struck coins are among the historic artifacts on display in fixed exhibits.

Also displayed is the original Janvier reducing lathe from 1907, first used in the die-making process for the Saint-Gaudens gold coinage. The Janvier reducing lathes were mothballed less than six years ago when digital sculpturing and die production technology were introduced at the U.S. Mint.

Tom Jurkowsky, director of the U.S. Mint’s Office of Public Affairs, said it is hoped that if additional funds become available, more exhibits can be added to the public tour.

More than 200 historical Mint artifacts are currently on display.