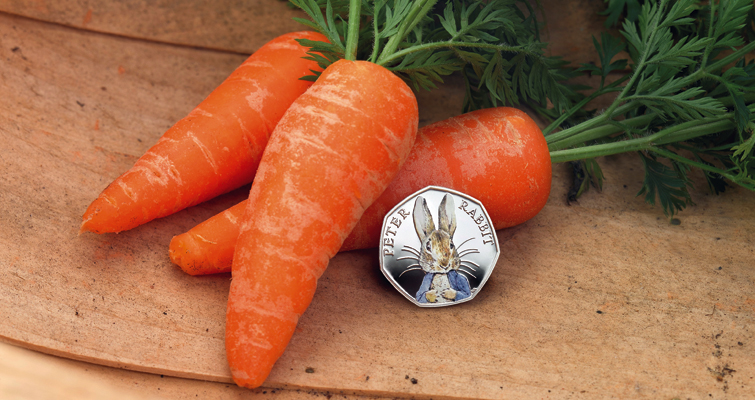 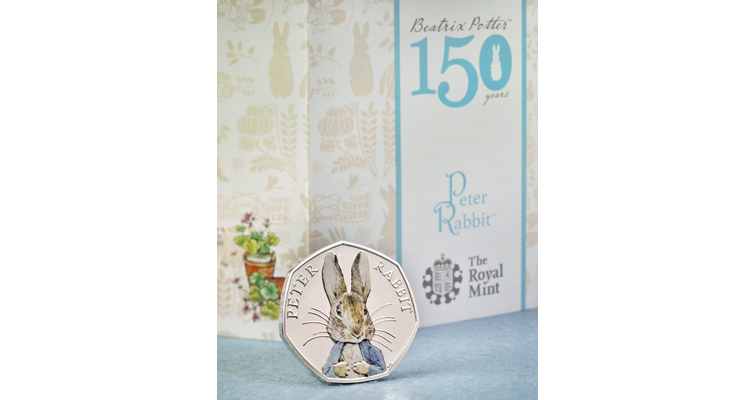 “Once upon a time there were four little Rabbits, and their names were — Flopsy, Mopsy, Cotton-tail, and Peter.”

Peter Rabbit, the most recognizable of Potter’s creations and one of the most cherished figures from children’s literature, stars in the design of 2016 50-penny coins announced Feb. 29 by the Royal Mint.

The coin is available in a trichromatic pad printed (colorized) Proof silver version and a Brilliant Uncirculated copper-nickel version without color. A plain copper-nickel 50-penny coin featuring Peter Rabbit will be released into circulation later this year as a third version of the same design, the Royal Mint said. Peter Rabbit will be followed by coins featuring three other iconic characters as the series continues through the year.

These are the first characters from children’s literature to appear on coinage of the United Kingdom. The four characters will join a fifth design, already issued in several noncirculating legal tender coin versions, to celebrate the 150th anniversary of the birth of Beatrix Potter in 2016.

Royal Mint coin designer Emma Noble (who created the Potter design released earlier in 2016) designed the character coins. “I wanted to put Beatrix Potter’s illustrations to the forefront of my design as they are lovely images and the characters are very well known,” she said in a press release. “I felt they were strong enough to stand alone and I designed them in this way as I thought they would work best for both the coloured commemorative and un-coloured circulating coins.”

All versions of the Peter Rabbit coin weigh 8 grams and measure 27.3 millimeters in diameter (measured from point-to-point).

The Proof .925 fine silver version has a mintage limit of 15,000 pieces and retails for £55. The Brilliant Uncirculated copper-nickel version has an unlimited mintage and retails for £10. The mintage of the circulating version will be determined by demand for the denomination in the cash cycle. 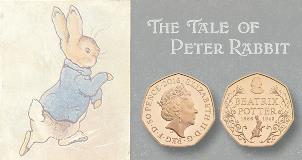