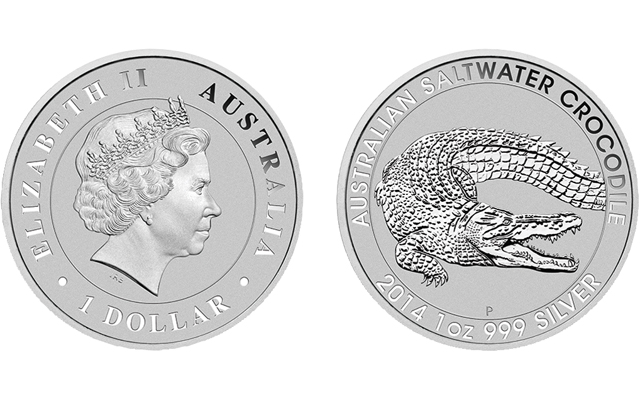 The Perth Mint has launched a new 1-ounce, .999 fine silver $1 coin, celebrating the Australian Saltwater Crocodile. It has a mintage limited to 1 million coins.

The coin’s reverse features a large saltwater crocodile with its mouth open, displaying its sharp teeth. It also features the inscription AUSTRALIAN SALTWATER CROCODILE, the 2014 year-date and coin specifications, as well as the Perth Mint’s "P" Mint mark. The Perth Mint has not disclosed the reverse designer's name.

The coin’s obverse bears the Ian Rank-Broadley effigy of Queen Elizabeth II and the denomination.

The Australian saltwater crocodile is the largest reptile in the world in average body mass and is found from northern Australia through southeast Asia to the eastern coast of India. Despite the name, the saltwater crocodile does not inhabit only salt water but is found in fresh, brackish or saline water in ponds, swamps, lakes, creeks, streams, rivers, billabongs, and the ocean.

The saltwater crocodile is an extremely formidable and opportunistic predator, propelling itself through the water with surprising speed and capable of killing almost any animal that enters its territory. Its sheer enormity makes it the most dangerous of all crocodiles to humans.

The coin measures 40.6 millimeters in diameter and has a mintage limited to 1 million pieces. The coin is presented without capsules in protective acrylic tubes of 25 coins or in “monster boxes” containing 20 tubes.

The coin is the first in a planned series.

According to Makeila Ellis, media and events officer at the Perth Mint, “At this point we have confirmed designs for the next two years.”

Ellis did not elaborate on how many designs would be issued per year, however.

The Perth Mint, like many world mints, does not sell bullion coins directly to the end buyer, but rather uses a tiered distribution network of distributors who sell them to dealers who sell the coins to the public.

American Precious Metals Exchange and Talisman Coins are official distributors for the Perth Mint. Pricing was unavailable, but likely will fluctuate based on the metal value, a standard practice with bullion coins.