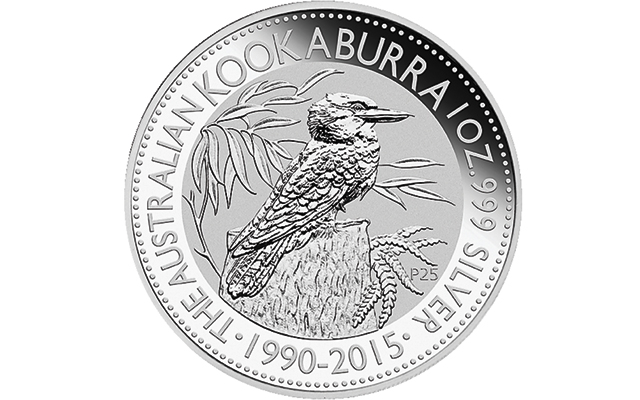 To mark the 25th anniversary of the Kookaburra silver bullion program, the Perth Mint returns to the inaugural design from 1990 for the 2015 coins. 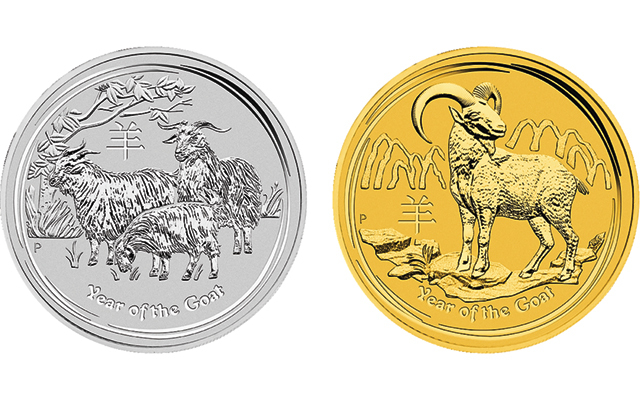 Two different designs are being used for the Chinese Zodiac (Lunar Year) coins for the goat, with silver coins showing a family of shaggy goats, left, and a lone ram perched on a rocky outcropping on the gold coins, right. 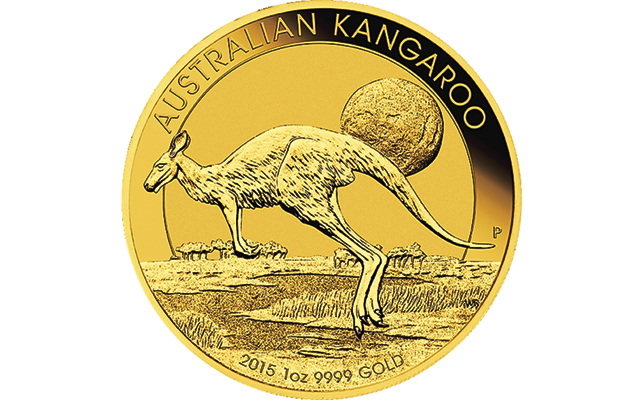 A kangaroo bounds across the Australian outback with the moon looming over the scene on the 2015 Kangaroo gold coins.

Perth Mint officials on Aug. 13 announced details of the annual bullion programs, which include the Chinese Zodiac calendar (or Lunar Year) animal silver and gold coins, as well as the silver Kookaburra, silver Koala, and gold Kangaroo coins in various sizes and finishes.

Perth Mint officials have not released details about collector versions of any of the bullion coins as yet.

Most notably, the Kookaburra silver bullion coin program will feature a special design to mark the program’s 25th anniversary.

The various programs offering the 2015-dated coins are being rolled out over several months, starting in 2014. The release schedule will continue a practice the Perth Mint has employed in recent years as interest in the program has risen.

Bullion examples of the 2015 Kookaburra and Year of the Goat coins all become available Sept. 1, 2014, with 2015 Kangaroo gold coins available beginning Oct. 6, and 2015 silver Koalas due for release Nov. 3.

The Kookaburra bullion coin program contains 1-ounce, 10-ounce and kilogram coins; the Koala program includes those sizes as well as a half-ounce size.

The Kangaroo coins are offered in tenth-, quarter-, half- and 1-ounce sizes, and a 1-kilogram version.

The 2015 bullion coins all depict Ian Rank-Broadley’s effigy of Queen Elizabeth II on the obverse.

For each program, the reverses offer a design or designs specific to the program.

The 2015 Kookaburra coins feature the same reverse design that appeared in 1990 when the program began, an adult kookaburra sitting on a tree stump surrounded by eucalyptus leaves and a fern. A dual date 1990–2015 marking the anniversary also appears.

All 2015 Australian Koala silver coins depict a mature koala sitting in a tree with an Australian bush landscape in the background.

A bounding kangaroo crosses the Australian outback with the moon in the background on the design for four of the 2015 Kangaroo coins (1-ounce and three fractional sizes). The kilogram-sized coin has Stuart Devlin’s Red Kangaroo design.

Two designs are used for the Lunar Year coins this year, with all silver coins sporting a shaggy family of goats on their reverses. A lone ram perched on a rocky outcropping with stylized mountains in the background dominates the reverse of the Lunar Year gold coins.

Two changes were made to bullion mintages this year.

The Lunar Year coins are again expected to be the most popular issues.

Though the Lunar New Year does not begin until Feb. 19, the limited mintage bullion coins celebrating the theme are expected to be sold out before then, if sales trends in recent years are repeated.

Interest in the 2014 Year of the Horse coins was driven at least in part by the usual limited mintages, which are smaller than mintages for the Perth Mint’s other annual bullion programs.

The Lunar silver coin is limited to a mintage of 300,000 coins and the gold coin has a limit of 30,000 pieces, and both bring strong prices in the secondary market. Mintages for the new year’s versions of those coins remain at the same levels, established with the program’s debut in the 1990s.

The mintage of 2015 Koala silver coins, as is usual for that annual bullion program, will be limited to the number of coins ordered during a 12-month span.

Full size, weight, diameter and denomination specifications are listed in the Coin World Almanac, Eighth Edition, or at the Perth Mint website.

Proof collector versions in various sizes, some with different technological applications, will be offered in the coming months.

Perth Mint bullion coins are sold through a network of distributors.

Keep up with CoinWorld.com news and insights: