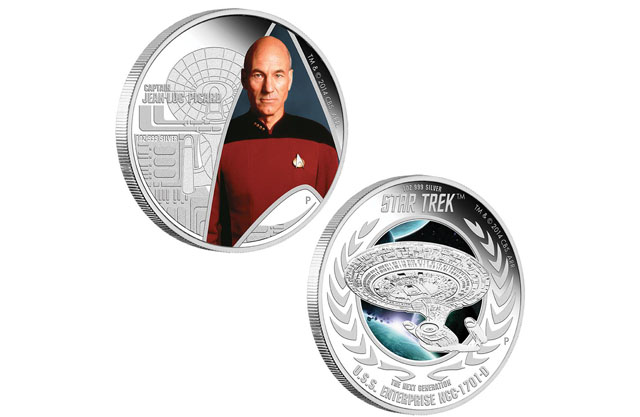 The Perth Mint has released a pair of commemorative silver $1 coins featuring Jean Luc Picard and the USS Enterprise.

Fans of Star Trek: The Original Series have their collector coins; now it’s time for "The Next Generation" to get in on the action.

The Perth Mint has released a pair of 1-ounce, .999 fine silver commemorative Proof $1 coins that pay tribute to the fictional Captain Jean-Luc Picard (played by Patrick Stewart) and his USS Enterprise NCC-1701-D of Star Trek: The Next Generation.

The release comes only a few months after the Perth Mint released numismatic tributes to Picard’s predecessor, Captain James T. Kirk, and the original Enterprise.

The Perth Mint provides the history of the series on its website:

Gene Roddenberry’s Star Trek: The Next Generation debuted in 1987, and ran for seven seasons until 1994. Set in the Milky Way Galaxy, the first season takes place in 2364, featuring a new crew and a new starship, USS Enterprise NCC-1701-D.

In 2364 Captain Jean-Luc Picard was appointed commander of the Enterprise, a position he held for seven years while participating in many important missions, including the defeat of the Borg invasions in 2366 and 2369, and his command of the fleet which blockaded the Klingon-Romulan border during the Klingon Civil War.

While the two coins are each available individually for $104.55 Australian (Picard here and Enterprise here), the two-coin set, with an issue limit of 1,500, is already listed as unavailable on the Perth Mint’s website.

The Ian Rank-Broadley effigy of Queen Elizabeth II, the 1-dollar face value, the issuing nation, and the 2015 year-date are shown on the coin’s obverse.

The coins are legal tender in Tuvalu.