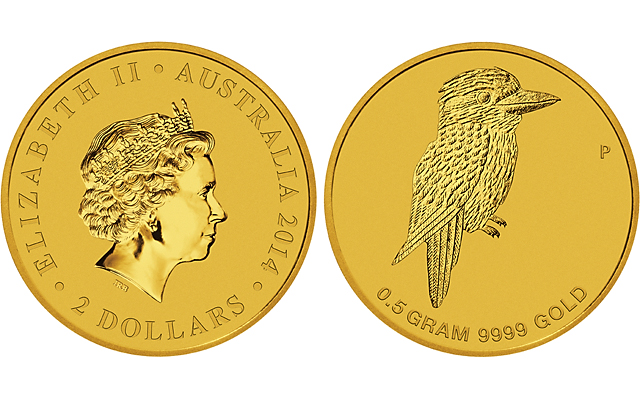 A new half-gram gold Mini Kookaburra is available from the Perth Mint. The unlimited mintage coin is 11.6 millimeters in diameter, about the size of a shirt button.

A new Kookaburra .9999 fine gold $2 coin is now available from the Perth Mint.

The "Mini Kookaburra" coin was officially launched at midnight May 6 in Western Australia, where the Perth Mint is located, as the third half-gram gold coin in miniature form featuring the Perth Mint’s bullion themes. Annual series offering Mini Roo and Mini Koala half-gram coins also have been issued in recent years.

The release time was noon Eastern Daylight Time May 5 in the United States.

The tiny coin, “button-sized” as the Perth Mint described the new issue, is intended as a way for collectors to obtain gold at relatively affordable prices.

The design of the Kookaburra coin changes annually and is by Natasha Muhl in 2014, showing a lone bird in an otherwise nearly empty design field.

The coins are delivered inside a protective acrylic capsule and presented in a colorful “wallet-sized card,” according to the Perth Mint.

Distributor Talisman Coins offers the Mini Kookaburra to customers in North America for $47.95 each, or $45.95 each for quantities of five or more.

Customers may also order from the Perth Mint website.