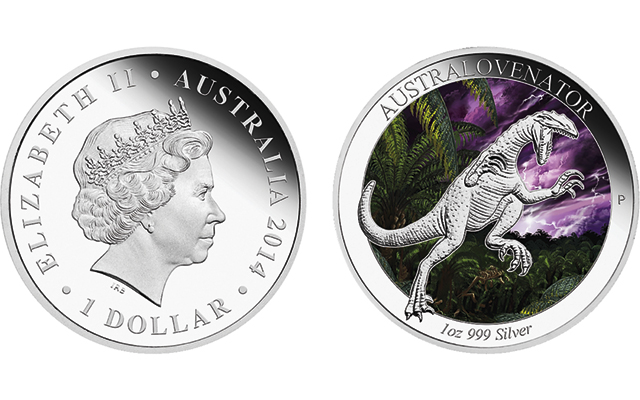 A new coin series from the Perth Mint celebrates something really old.

The five-coin program honors the Australian Age of Dinosaurs.

The first Proof 2014 1-ounce .999 fine silver dollar shows the Australovenator wintonensis, which was alive during the Cretaceous Period between 112 million and 102 million years ago.

The dinosaur species has been identified from limb bones, ribs and lower jaw remains discovered by vertebrate palaeontologist Dr. Scott Hocknull and colleagues in 2009. The fossils were discovered in what was once an ancient billabong (oxbow lake) near Winton, central Queensland, by personnel from the Australian Age of Dinosaurs Museum, with museum staff nicknaming the dinosaur “Banjo,” for the Australian poet, Andrew Barton “Banjo” Paterson.

The coin’s reverse depicts an example of the dinosaur set against a colorful, prehistoric scene with the dinosaur name and metal weight identification.

The obverse depicts the Ian Rank-Broadley effigy of Queen Elizabeth II, the year 2014, and the denomination.

The 1-ounce coin measures 40.6 millimeters in diameter and has a mintage limit of 5,000 pieces.