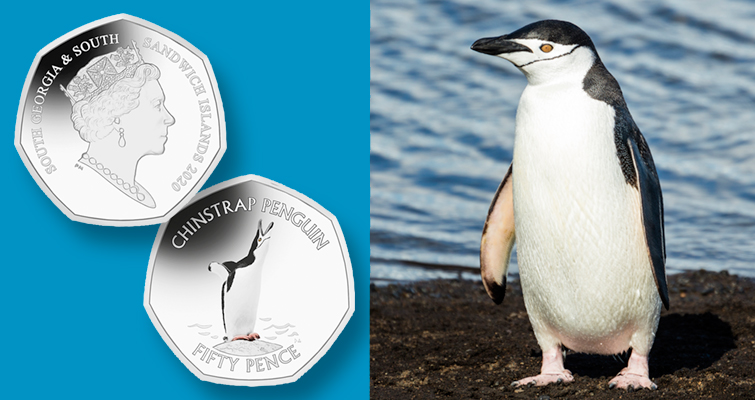 Penguins continue to be a popular motif for the Pobjoy Mint, which has just launched a new series of 50-penny coins depicting the flightless birds.

The first coin in the 2020 50-penny coin series on behalf of South Georgia and South Sandwich Islands features the chinstrap penguin.

Two versions were issued, with a copper-nickel Diamond Finish colored coin still available in a special collector album. The Proof .925 fine sterling silver version was sold out on release.

Many of these coins have sold out.

Situated about halfway between the southeast coast of Argentina and the Antarctic continent, South Georgia is often referred to as an Antarctic oasis, or “the Galapagos of the poles,” because of the huge numbers of penguins that breed there. The penguin is often regarded as the emblem of Antarctica, as penguins are the most common birds in the Antarctic.

They live in such vast quantities that the population of some colonies can be greater than that of some cities, with the total number of breeding pairs in the Antarctic region estimated to be 20 million.

Chinstrap penguins are often referred to as “stonebreaker” or “stonecracker” penguins,” as their screech is so piercing that some say it could break stones.

The reverse of the coins feature a male chinstrap penguin screeching.

The Pobjoy Mint’s exclusive effigy of Queen Elizabeth II is shown on the obverse of the coins.

The copper-nickel coin has a mintage limit of 2,500 pieces, and is presented in a capsule with a blue pouch.

Purchases of larger quantities, or the special colorful collector’s album, sold separately, will not include the pouch.

The Proof silver coin is presented in an acrylic box with a special presentation sleeve.

To order the coin, visit the firm’s website, www.pobjoy.com. 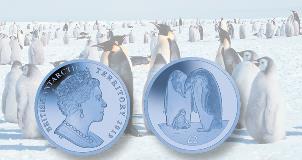 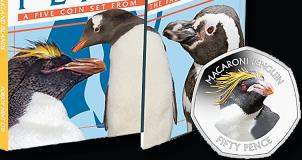 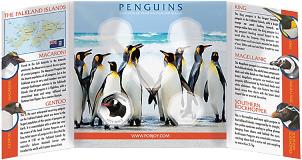