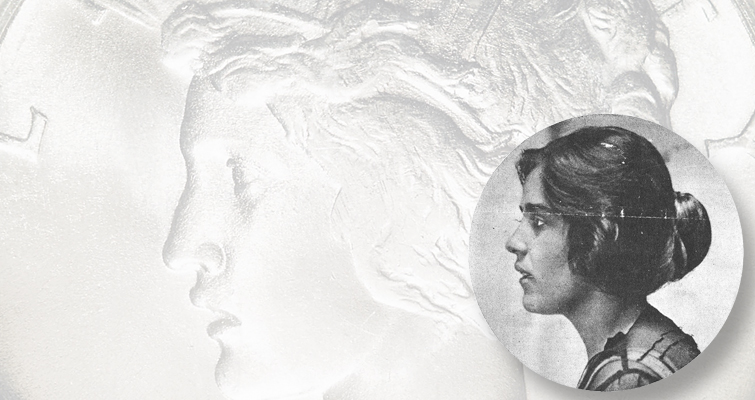 Peace dollar artist Anthony de Francisci Liberty to express “the spirit of the country, the intellectual speed and vigor and virility America has, as well as its youth.” 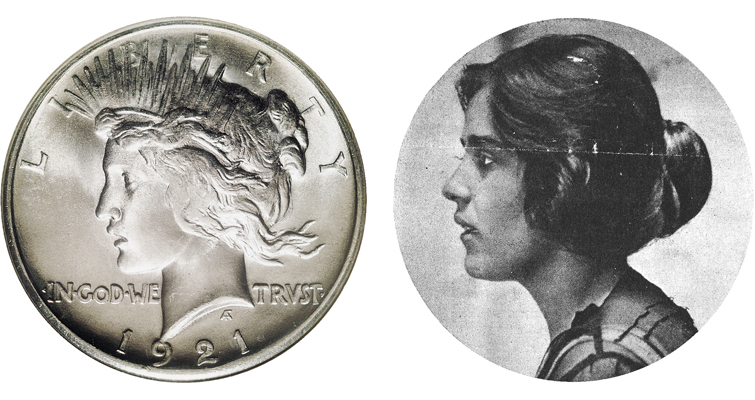 Look at the portrait of sculptor Anthony de Francisci's wife, Teresa, right, and how her likeness was rendered for the obverse of the Peace dollar introduced in 1921 to replace the Morgan dollar. 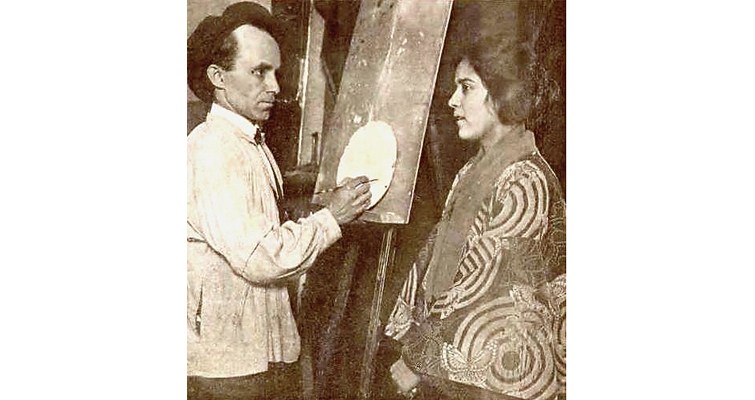 Liberty’s hairstyle was provided by a city breeze. Sculptor de Francisci opened a window in his studio while his wife posed. 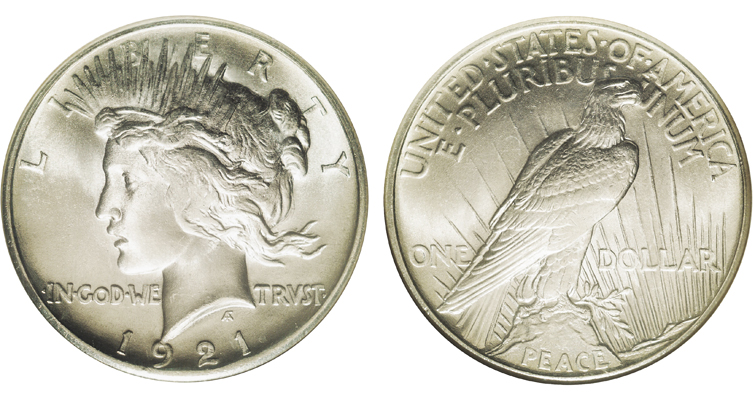 The Peace dollar derives its moniker from the PEACE inscription that appears on the base of the rock on which the eagle is perched on the reverse.

There’s a bit of romance in the portrait of Liberty on the Peace dollar, and an acknowledgement of the changing complexion of the United States as immigrants flocked to our shores in the early 20th century.

Sculptor Anthony de Francisci, 34, was only recently married to Teresa Cafarelli, 21, when he entered the design competition for a dollar coin to celebrate the peace that followed World War I.

Working in his studio on the top floor of a weather-beaten rowhouse at 24 W. 16th St. in New York City, the young Sicilian immigrant chose his Italian wife as the model for the bust of Liberty that appears on the coin’s obverse.

He wrote to The Numismatist in 1922 that he was invited to compete for the commission on Nov. 23 and given a deadline of Dec. 13, 1921. “I had only 18 days notice to make this design,” he told a Newspaper Feature Service reporter in early 1922. “I had to work many hours a day before I got the right idea,” he wrote.

The right idea was a youthful, vibrant Liberty, rather than the matrons who frequently appeared as Liberty on American coins. The perfect model, it turned out, was none other than his young wife.

“I was unable, owing to the shortness of time to engage in the search of a model akin to my mind’s picture — that is a professional model. I derived some help from the features of Mrs. de Francisci, but generally the Liberty head as it stands is a composite one,” he wrote.

He told the Duluth (Minn.) Tribune, “It is a composite face and in that way typifies something of America. I did not try to execute an ‘American type’ or a picture of any woman. I wanted the Liberty to express something of the spirit of the country — the intellectual speed and vigor and virility America has, as well as its youth. ”

Liberty’s hairstyle was provided by a city breeze. He said, ”I opened a window of my studio and let the wind blow on her hair while she was posing for me.”

Newspaper Feature Service reporter Betty Van Benthuysen described Teresa de Francisci: “She is of that peculiar, diminutive type that seems half child, half woman. Raven hair frames a profile that is regular. The face is rounded and soft. It’s the face of the southern seas. ...

“It was Miss [Anna] Williams [model for Liberty on the Morgan dollar], a typical American of British line, whose face had always been seen on the dollar before, and the transition to the softer type of the land of olives carries with it the added interest of forcing a study in national expansion and in the change in the all-American type of citizenship.”