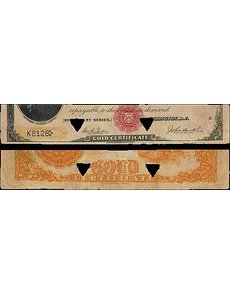 This fragment of a Series 1882 $10,000 gold certificate with new Friedberg number F-1223f-I sold at the PCDA auction for $8,500. The gold certificate was redeemed, hole punch canceled and cut into pieces with the bottom portion retained, probably as a souvenir.

The news of the trade focuses on the recent International Currency and Coin Convention held Nov. 10 to 13 in Rosemont, Ill.

This is a new location for the show, which has been sponsored annually by the Professional Currency Dealer Association for 26 years.

This year, the bourse area, with close to 80 dealers, offered not just the standard array of United States and world paper money, but also, for the first time, U.S., foreign and ancient coins. Along with educational programs, a three-session live auction was conducted by Lyn Knight Currency Auctions. And in that auction was a portion of a note that relates to a request we received several months ago.

The infrequent request was to assign a Friedberg number to a previously unknown note. In this case it was for a fragment of a note (the bottom half). That fragment will be cataloged as Friedberg 1223f-I in the next edition of our book, Paper Money of the United States.

Listed as Lot 1917, it is the fragment of a Series 1882 $10,000 gold certificate with the signatures of Register of the Treasury Gabe E. Parker and Treasurer of the United States John Burke, a previously unrecorded signature combination for this type note.

It is probable that no one will ever know the complete story of this remarkable oddity.

The half note has two hole-punch cancellations indicating that it was redeemed and the cataloger speculates that this half of it was kept as a souvenir. The partial note sold for $8,500.

The other was Lot 1906, a Series 1905 $20 gold certificate, F-1180, often referred to as a “Technicolor note” because of the vivid, yellow and red tints on the face of the note. It sold for $85,000. With a grade of Gem New 67, it ranks among the finest known and traces its pedigree to a small group of 25 notes owned by the legendary Texas collector William A. Philpot Jr., who acquired them from an acquaintance at the Treasury Department. When last sold in 2007, the note brought $115,000.

Overall, the auction was representative of what is popular among collectors and showed a level of relative stability in the marketplace. ¦