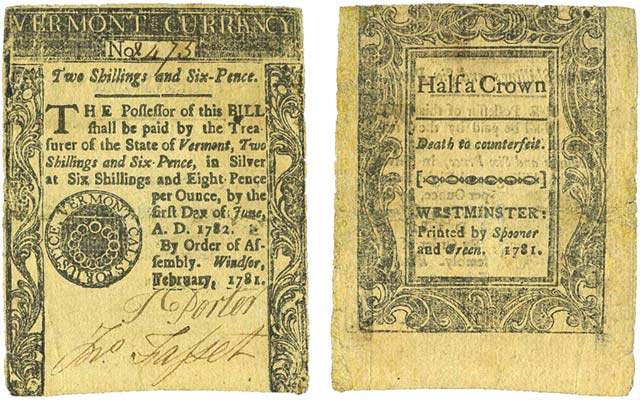 This 2-shillling 6-penny note was printed by Judah Spooner and Timothy Green III in 1781. 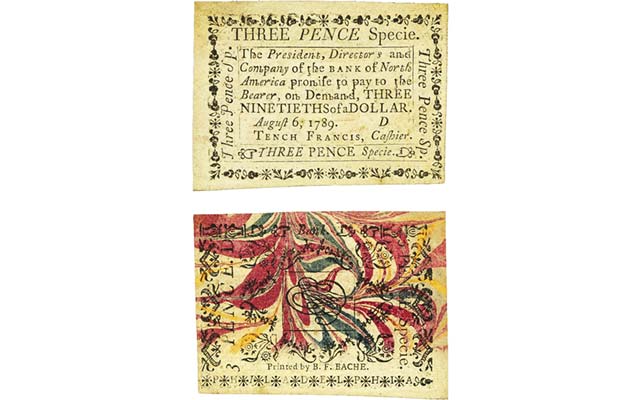 Benjamin Franklin’s grandson printed this marbled 3-penny bill for the Bank of North America. The back is signed PRINTED BY B.F. BACHE.

This is the last in a series of articles taken from the cover feature in the November 2015 issue of Coin World Monthly:

Freedom had barely been won when Federalists in Congress passed the Sedition Act of 1798, essentially making it a crime to criticize the government or politicians. More than a dozen printers across the country, including Benjamin Franklin’s grandson, Benjamin Franklin Bache, and reportedly Judah P. Spooner, were arrested by the John Adams administration for violating the law.

Bache printed curiously denominated Bank of North America notes of Aug. 6, 1789. The notes, printed on paper brought from England by Benjamin Franklin, were denominated 1 penny or 1/90th of a dollar and 3 pence and 3/90th of dollar.

Spooner and partner Timothy Green III printed Vermont’s sole state issue, the 1789 issue in eight denominations ranging from 1 shilling to £30. The bills have a seal showing 13 joined links and one link at the top standing alone. In The Early Paper Money of America, Eric Newman writes, the loose link exemplifies “Vermont’s objection to being excluded from being one of the original colonies asserting statehood.”

Bache, printer of the Philadelphia Aurora, was arrested June 26, 1798, and charged with “libeling the president and the executive government, in a manner tending to excite sedition, and opposition to the laws, by sundry publications and republications.”

His crime: writing that the 63-year-old Adams was “old, querulous, bald, blind, crippled, [and] toothless.”

Spooner printed a letter by Vermont Rep. Matthew Lyon asserting that under President Adams “every consideration of the public welfare” was “swallowed up in a continual grasp for power, in an unbounded thirst for ridiculous pomp, foolish adulation, and selfish avarice.”

Contemporary newspapers report that Spooner was indicted and arrested, but historians doubt the fact. Lyon, though, was convicted, fined $1,000 and imprisoned for four months.

When Thomas Jefferson was elected president in 1800, he pardoned all those convicted of violating the Sedition Act.

It was too late, though, for Franklin’s grandson. Before the 29-year-old Bache could be brought to trial, he died of yellow fever on Sept. 10, 1798.