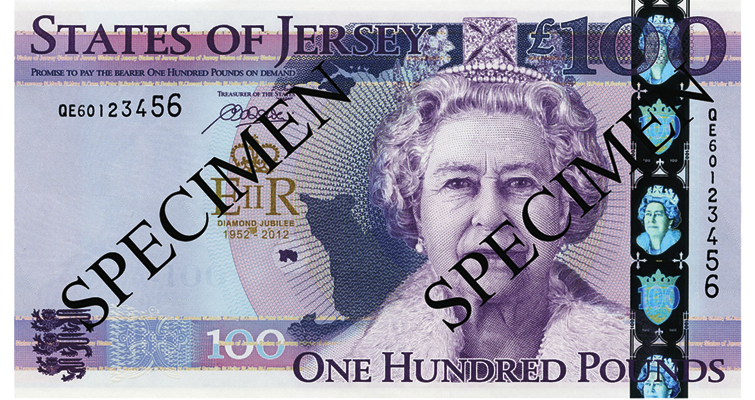 A circulating commemorative £100 note from the States of Jersey celebrates the Diamond Jubilee of Queen Elizabeth II.

Image courtesy of the States of Jersey. 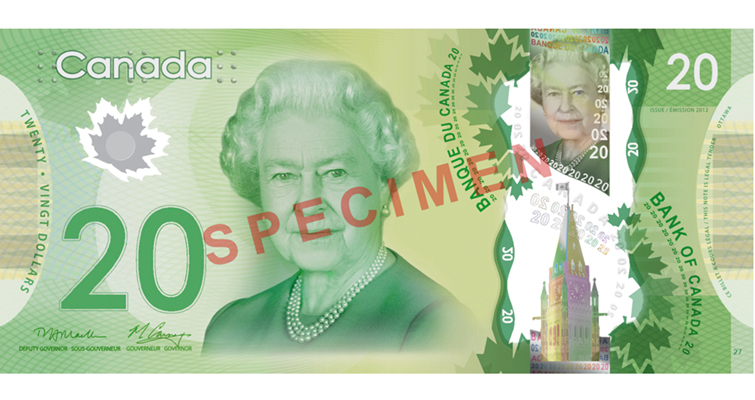 Canada’s modern, lifelike portrait of Queen Elizabeth II on a 2012 $20 note was upstaged by minor controversy regarding the design on the back of the note (not shown).

Editor's note: this is the final part of a series by Jeff Starck exploring the parade of paper money featuring Queen Elizabeth II. The feature appears in the September monthly issue of Coin World.

The new millennium brought continued change to images of the queen on paper money.

Two notable issues both celebrate the most recent significant milestone for the queen’s reign, the Diamond Jubilee in 2012.

The States of Jersey issued a £100 note that broke some new ground for images of the queen, especially for bank notes.

The note features a printed image of the queen based on artist Chris Levine and holographer Rob Munday’s holographic portrait of her, titled Equanimity.

The first hologram of the queen according to Jersey officials, was commissioned in 2004 by Jersey Heritage Trust on behalf of the States of Jersey, to commemorate the 800th anniversary of the island’s allegiance to the British crown. The queen was 78 years old at the time the image was created.

Early in this decade, Canada upgraded security features on its bank notes, adopting polymer technology in concert with numerous other effects. The Canada $20 note was updated in 2012, which also mark the jubilee.

The note’s face features a nearly contemporaneous portrait of Queen Elizabeth II and a vignette of the clock tower of the Canadian Parliament building in Ottawa.

This note garnered headlines, but for the wrong reasons. Canadian media reported that some Canadians characterized the Vimy Memorial on the note’s back as pornographic, while others saw it as possibly resembling the destroyed “Twin Towers” of the World Trade Center in New York City.

Collectors desiring one note celebrating multiple images of the queen’s life need look no further than the 2012 £10 note issued by Scotland for the Diamond Jubilee.

The face of that note depicts the relatively unknown Scottish politician Archibald Campbell, but the back is a veritable cavalcade canvas. There, the images include a picture of Elizabeth at Balmoral, an official photograph taken in the 1940s, an image of her attending the Mass for the Order of the Thistle, and another taken at Epsom Racecourse in 2008.

As long as she remains on the throne, Queen Elizabeth II seems assured of a continuing special place on paper money of the United Kingdom and the Commonwealth of Nations.

A collection of notes honoring her, built around whatever approach you may take, is there for the making.