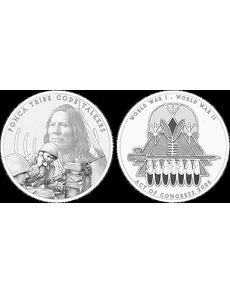 Meeting in Washington July 24, the Citizens Coinage Advisory Committee gave its support to designs that were backed by officials from the six tribes.

On July 18, the Commission on Fine Arts approved recommendations for the same medals. The CFA’s review tended to endorse the least cluttered designs, not necessarily ones backed by tribal officials.

The designs for all six medals must be approved by Treasury Secretary Jacob J. Lew before the medals can be struck.

In all, Defense Department officials have certified 32 tribes as eligible for the medals that honor Native American service personnel who served as wartime code talkers, using their native tongues to communicate.

The two review panels differed in the selection of designs for the Pueblo of Acoma medal. The CCAC strongly backed the New Mexico tribe’s choice of a medal showing a radioman carrying a rifle on a Pacific Island, but the CFA endorsed a view of a seated soldier writing a message.

For the reverse, the CFA endorsed a design based on the Pueblo of Acoma seal while the CCAC backed a design also based on the seal, but showing woven tribal patterns and color schemes on the rim, requested by the tribe.

Arizona’s Hopi Tribe won support from the CCAC for its favored obverse showing two infantrymen with a B-24 bomber overhead. The CFA selected another similar scene showing two soldiers also in a combat position, but without rifles.

For the reverse, the CFA backed a Hopi tribal seal that it described as “the simplest design” of three submitted. The CCAC strongly supported a design that the tribe endorsed, in part because it placed “World War II” near the bottom rim.

The Oneida Nation of Wisconsin won backing from both panels for its favorite obverse, which features a rifleman against a drawing of eagle feathers and the wording “Oneida Nation Warriors.”

The CFA urged the eagle feathers be removed from the medal “as a confusing design element.” In contrast, the CCAC liked the feathers and strongly endorsed the design.

The panels split over how the Oneida tribal seal should be depicted on the reverse. The CCAC accepted the tribal recommendation but called for an oval placed around animal tracks to be removed from the design. The CFA endorsed a similar design, also urging the oval be removed.

Oklahoma’s Ponca Tribe won backing from both panels for an obverse featuring the tribe’s Chief White Eagle. Both urged that the circular radio waves be removed from the design and that a helmeted communications man be moved away from the chief’s chin.

Only one design was submitted for the reverse tribal seal and it was praised by the CFA staff as “a clear and simple design.”

Arizona’s Tonto Apache Tribe’s requested obverse was backed by both panels. The CFA liked the image of a radioman moving into combat “due to the sense of movement” and the use of a second figure in the background.

The proposed reverse created considerable comment by CCAC members who questioned whether the tribe wanted to place the wording “World War II” over a cross that was the tribal seal. That was the tribe’s stated preference, but both panels endorsed a design that placed the wording on the rim of the medal.

The CCAC balloting gave their choice 23 points out of a possible 30 points and 22 points to the tribe’s favored reverse.

The reviewers split over the obverse of the White Mountain Apache Tribe medal. The CCAC strongly endorsed the Arizona tribe’s request for a medal showing two code talkers behind sandbags.

Only one White Mountain Apache reverse design, showing a tribal seal, was submitted to the reviewers, and it was approved by both panels. The CFA urged steps “to improve the clarity of this design.”

Defense officials have yet to review the designs, and CCAC members were told that further revisions might be made after that review and consultations with the tribes. ¦