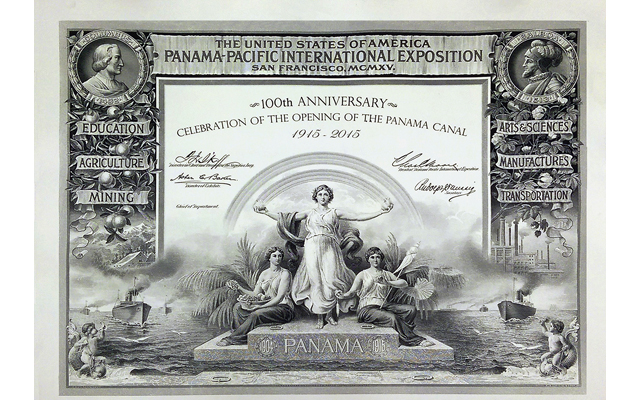 The third and final print in the Bureau of Engraving and Printing's Panama Canal Commemorative Intaglio Print Program illustrates the Panama-Pacific Exposition Certificate.

The third and final print to be issued July 9 by the Bureau of Engraving and Printing in its Panama Canal Commemorative Intaglio Print Program features the Panama-Pacific International Exposition Certificate.

Printed in black ink only, the print measures 17 inches by 22 inches. Individual prints, at $75 each, will be available while supplies last, according to BEP officials.

The Panama Canal Commemorative Intaglio Print Program highlights the 100th anniversary of the opening of the Panama Canal. The intaglio certificate available July 9 is a reproduction of the original PPIE certificate the BEP produced for several award-winning exhibits at the Panama-Pacific International Exposition (World’s Fair) in 1915.

Vignettes illustrated on the certificate include the following:

Center left vignette: Ornamental panel featuring oranges, engraved by Harry L. Chorlton and Edward M. Hall, 1915. A small rural home and mountainscape appears below the vignette of oranges and their foliage, while the words EDUCATION, AGRICULTURE and MINING appear on ribbonlike banners across the orange vignette.