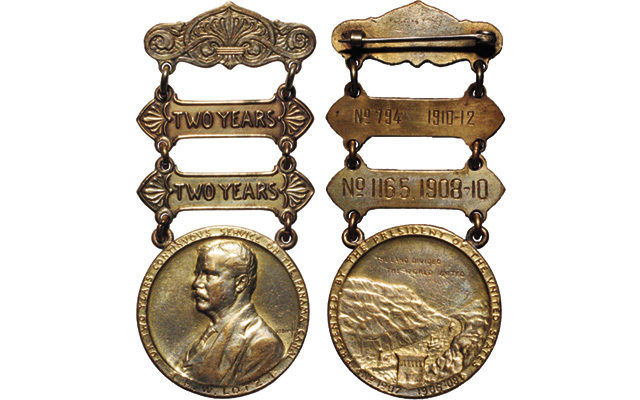 A Panama Canal Service Medal, issued to one of the workers who spent two years working on the canal, highlights Davisson’s Ltd., auction No. 34, which closes Jan. 21, 2015.

About a century after the Panama Canal was completed, a medal awarded to a construction worker who worked on the canal highlights an auction from Davisson’s Ltd.

The firm’s 34th mail-bid and live Internet auction, closing Jan. 21, features a Panama Canal Service medal, awarded to an H.W. Lotz. The medal was designed by Victor David Brenner, a name that many collectors recognize for his design gracing the Lincoln cent. The medal measures 30 millimeters in diameter and is suspended to a ladder badge (with bars and pins).

The obverse of the medal shows a bust of President Theodore Roosevelt facing left, and was based on a sitting Roosevelt participated in for Brenner. The recipient’s name is engraved below the bust of Roosevelt.

The medal was consigned by a descendant of the recipient, according to Allan Davisson, who told Coin World he spent hours cataloging the piece, digging to find as much history behind it as he could locate.

Davisson said Lotz’s name was not in archives, but his wife was mentioned in a brief note about social life of the Zone for her election to leaders of the Isthmian Canal Rebekah Lodge, No. 1.

The reverse of the medal presents a view of the Culegra Cut in the finished canal with steamers passing through, Gold Hill to the left and Contractor’s Hill to the right. An inscription, THE LAND DIVIDED THE WORLD UNITED, appears in two lines, and another inscription, PRESENTED BY THE PRESIDENT OF THE UNITED STATES, appears around a raised rim.

Two numbered bars, each indicating two years of service and work on the canal, are attached to the medal. The bars were numbered sequentially as they were awarded to workers. These are numbered 794 for the years 1910 to 1912 and 1165 for the years 1908 to 1910, Davisson said.

The medal is graded Extremely Fine by the firm but exhibits “a few minor marks on the surface; the pin on the reverse is in perfect condition,” according to the catalog.

Building the canal was a remarkable engineering achievement and the work was particularly difficult and demanding.

Keeping engineers and skilled workers from America was difficult. These medals, beginning with the medal and header with subsequent bars, were awarded to U.S. citizens who worked at least two years in the zone.

Davisson added: “This is a particularly well designed and fascinating piece of American history.”

Potential buyers seeking to review the research Davisson has compiled may contact him for further information.

The auction does not have a buyer's fee.

The sale is also posted on the company’s website.