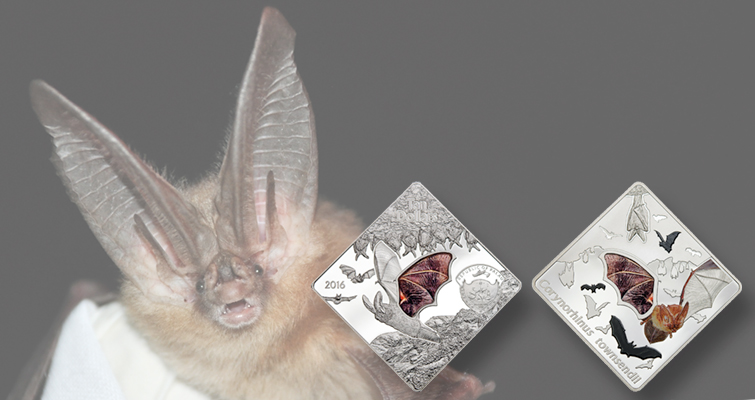 A Proof 2015 silver $10 coin from Palau honors the Townsend’s big-eared bat in color and with a glass insert.

A new $10 coin from Palau celebrates a creature of the night.

The Proof 2015 .999 fine silver $10 coin, which is due for release in February, shows multiple examples of Townsend’s big-eared bat (Corynorhinus townsendii) using special techniques to draw attention to the mammal.

A colored glass wing insert and color on the coin itself showcase the creature.

Bats are mammals of the order Chiroptera whose forelimbs form webbed wings, making them the only mammals naturally capable of true and sustained flight. By contrast, other mammals said to fly, such as flying squirrels, gliding possums, and colugos, can only glide for short distances. Bats do not flap their entire forelimbs, as birds do, but instead flap their spread-out digits, which are very long and covered with a thin membrane or patagium.

The Proof coins measure 42 millimeters diameter square, weigh 50 grams and have a mintage limit of 999 pieces.

The coins are presented inside a capsule with a box and certificate.

Private issuer Numiscollect is coordinating the issue on behalf of Palau, but no American distributors have been announced as of press time.

Interested collectors will have to search the secondary market for this coin. 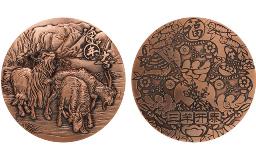 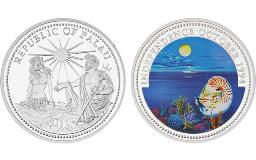 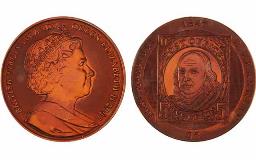