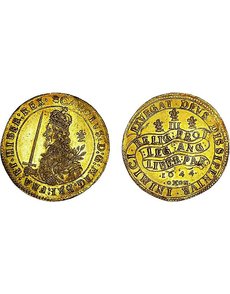 The largest gold coin ever struck in Britain (measured by diameter but not by weight or value), the triple unite of Charles I is one of the great rarities of the English hammered series.

With a face value of 60 shillings (£3), the triple unite weighs 421 grains, about .875 of an ounce. These coins were issued during the English Civil War by two mints (Oxford and Shrewsbury). They show the king (Charles I) on the obverse, with the reverse featuring his declaration of September 1642, in which he promised “to uphold the Protestant religion, the Laws of England and the Liberty of Parliament.”

Charles I made his declaration at Wellington in Shropshire, according to Coins of England and the United Kingdom, published by Spink (also called the Standard Catalogue of British Coins, 46th edition).

Of the pieces struck at Oxford, several minor varieties are known; two are offered during Dix Noonan Webb’s auction of British coins in London, with the difference being the appearance of a group of five pellets on the reverse of one of the examples.

The finer of the two examples offered in the auction, in about Mint State with proof-like surfaces, is “possibly the finest known of this type.” This piece lacks the grouping of pellets.

The British coins auction is one of four auctions the firm is conducting over four days in connection with the Coinex show in London. The British coins offering, cataloged as No. 93, includes 912 lots of British, Irish and Scottish coins from Anglo-Saxon and Norman times to the modern era.

Special consignments include the Charles Collection of Anglo-Saxon and Norman Coins and the Collection of Irish Coins formed by the late Adolf Ganter. In addition, the firm offers the first part of the James Sazama Collection of medieval coins, which will be sold in four parts annually during the Coinex auction through 2014.