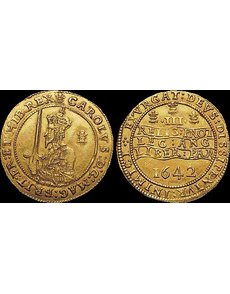 A 1642 gold triple unite (£3 coin) struck at Oxford is one highlight in Bonhams’ Dec. 13 auction of English coins. 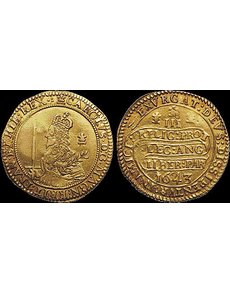 A mint inside the fortified city of Oxford was the only place Charles I triple unites were struck in 1643.

A pair of rare gold coins from the English Civil War highlights an auction in New York City.

Bonhams’ Dec. 13 auction of English gold coins from the 14th through 19th centuries features a pair of the famous Charles I gold triple unite coins, one dated 1642 and the other dated 1643. Both were struck at the makeshift mint in Oxford.

Triple unites are among a range of fascinating numismatic items from the English Civil War, also called the Great Rebellion. After Parliamentarians seized control of London (including the Tower Mint), Charles I was forced to use temporary mints across the land to strike coinage to fuel the war machine. Soldiers, after all, didn’t fight for free.

With a face value of 60 shillings (£3), the triple unites have a diameter of about 40 to 46 millimeters and weigh 421 grains, about .875 ounce. These coins were issued by two mints, at Oxford and Shrewsbury. Their obverse features a half-length figure of the king holding a sword vertically in his right hand and olive branch in the left. The reverse bears the abbreviated Latin “Declaration” of Sept. 19, 1642, in three lines.

The “Declaration” was a statement made by Charles I at Wellington, where he expressed his objection to Parliament’s interference in his divine right to rule and “to uphold the Protestant religion, the Laws of England and the Liberty of Parliament.”

King Charles I riled the citizenry with his heavy hand, setting up a clash between those who wanted the king to answer to Parliament, and those who supported the king’s right to absolute rule. A clash between Catholicism and Protestantism was also a major factor.

The opposition included Oliver Cromwell, who soon chased the king across the country, making Charles I “literally a king with an army, but without a kingdom, until he fortified himself inside the walls of medieval Oxford,” according to Bonhams.

The Cromwell faction was ultimately successful in ousting Charles I and eroding the monarchy’s future power, and Charles I was beheaded in 1649.

Collectors have identified several varieties among the Oxford Mint examples across all three years’ production, and most of those feature a plume Mint mark on the obverse.

The 1642 triple unite in the Bonhams auction is designated as Spink 2724 in Coins of England and the United Kingdom, published by Spink (and also called the Standard Catalogue of British Coins), 46th edition. Charles I, seen with a tall and narrow bust, holds a raised sword and olive branch.

The 1643 example, classified as Spink 2727, bears a different armorial bust and a longer olive branch, and lacks a scarf found around the king’s shoulders on some other examples.

While the triple unite coins were struck under wartime conditions, the quality of the designs is highly regarded, particularly the portrait used on the obverse. According to the auction house, “Generally speaking, the king’s portrait on these coins is perhaps more lifelike, and elegant, than on any of his other currency coins.”

The coins are part of a 45-lot collection cataloged as “Property of a Gentleman: An Important Collection of English Coins.”

The collection, which features many other English rarities, was built by an anonymous consignor over a decade, said Paul Song, director of the rare coins and medals department at Bonhams.

A catalog will be posted online and available for purchase. For more information, visit the firm’s website, www.bonhams.com/us, email it at coins.us@bonhams.com, or telephone the California office at 310-436-5455 or the New York office at 212-644-9001. ¦