Holiday season of 1921 yields over a million Peace dollars 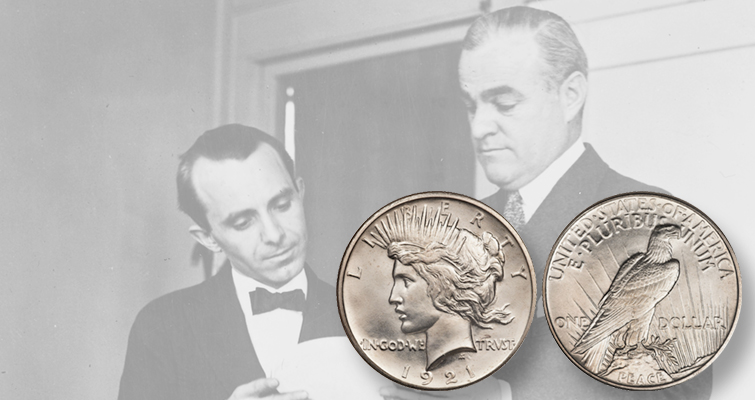 The replacement for the Morgan dollar, the 1921 Peace dollar, was designed and struck in the last weeks of the year, all in great haste. 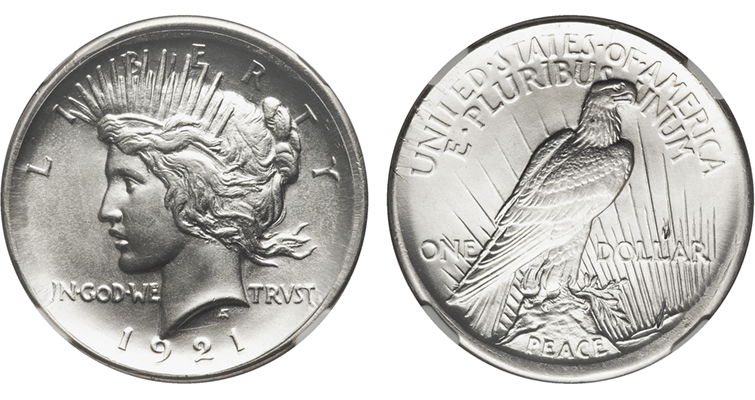 In 1921, the Philadelphia Mint struck 44,690,000 Morgan dollars and in the last week of 1921, it struck just over 1 million 1921 Peace, High Relief dollars. Both of these examples grade MS-65, and the weakness at the central part of the obverse of the Peace dollar is typical for the issue, even on high grade coins. 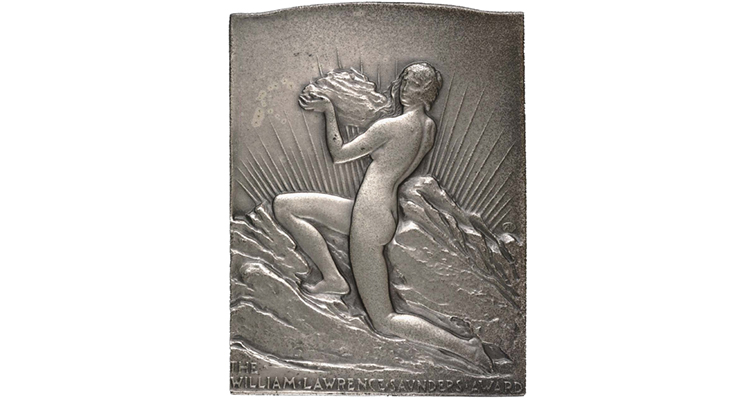 The artist used rays and a rock similar to that seen on the reverse of the Peace dollar on this 1927 award he designed to celebrate achievement in mining, and his eagle on his 1920 Verdun Medal served as a model for the eagle used on the Peace dollar.

This the latest installment in a series by Steve Roach about the Peace dollar from the October 2015 issue of Coin World Monthly.

George Morgan, more familiar than de Francisci with producing effective designs that could be used for mass-produced circulating coinage, modified the reverse to remove the broken sword, strengthen the rays, and then conceal the re-engraving. Working with both the hub and the master die, Morgan extended the olive branch to cover the sword and on the afternoon of Dec. 24, Baker wrote to Treasury Secretary Mellon presenting models of the proposed dollar, noting, “A slight alteration of the design for the reverse, as originally submitted, has been made in order to eliminate the broken sword.”

The cooperation that took place to make this dollar happen during the holiday season and with an ambitious high relief design for circulation coins is truly remarkable. The Mint’s last experience with mass producing high relief coins was back in 1907 with the Saint-Gaudens, High Relief double eagle and that experiment resulted in beautiful, but seemingly impractical coins.

The entire 1921 Peace, High Relief dollar production of 1,006,473 dollars was completed in just four days between Dec. 28 and 31, and de Francisci supervised the production of the first coins.

Recent research published by John Dannreuther in the May 2015 issue of The Numismatist shows that the Proof coins produced in 1921 and 1922 served as trials for subtle design modifications. In recent years, examples of these Proof coins and special strikings have come to market traced from the estate of Mint Director Baker.

While typical Morgan dollar dies could strike up to 200,000 coins, the 1921 Peace dollars saw an average die life of less than 25,000 coins per die pair and the design did not strike fully, making most surviving examples weakly struck.

De Francisci received 50 of his new 1921 Peace, High Relief dollars on Jan. 5, 1922, with Morgan writing, “I know you will be disappointed, but the pressure necessary to bring up the work was so destructive to the dies that we got tired of putting new dies in. …” De Francisci replied, “I had to agree with you in being disappointed over the results of the first strikes, however considering the speed we both had in this work the result seems rather satisfactory.” The artist then suggested more artistic ways to improve die life than to change the curvature of the ground, which Morgan proposed.

The first 1921 coins were released to the public on Jan. 4, 1922, through the Federal Reserve Bank in New York and each customer was allowed a single dollar. The next day the New York Tribune looked at the dollar as a fitting continuation of the artistic movement in coinage started by Theodore Roosevelt at the start of the 20th century writing, “The new design follows the ideals urged by Saint-Gaudens and others concerning richness and suggestiveness for our coins.”

After negotiation in January 1922, on Feb. 2, de Francisci wrote to Baker informing him that he would create a new obverse in lower relief, delivered the new low-relief models on Feb. 6 and production of the new 1922 Peace, Low Relief dollars began at the Philadelphia Mint on Feb. 13. The Denver and San Francisco Mints began production on Feb. 21 and Feb. 23, respectively.