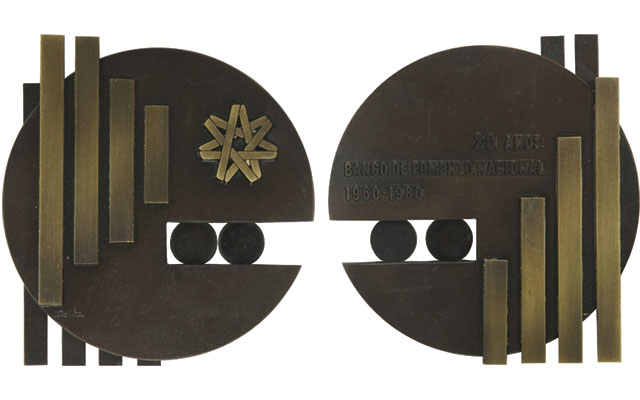 For its 20th anniversary in 1980, a Lisbon Bank, Banco de Fomento Nacional, issued a modernistic medal with moving coins in the center that cannot be removed. 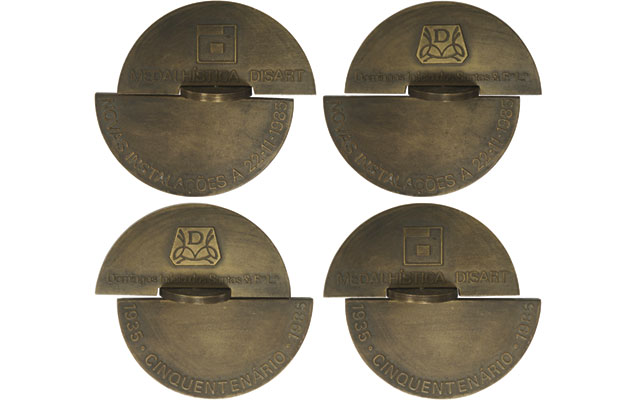 This 1985 50th anniversary medal advertises a medal-making company in Portugal. Two movable halves are split by a smaller medal that spins. 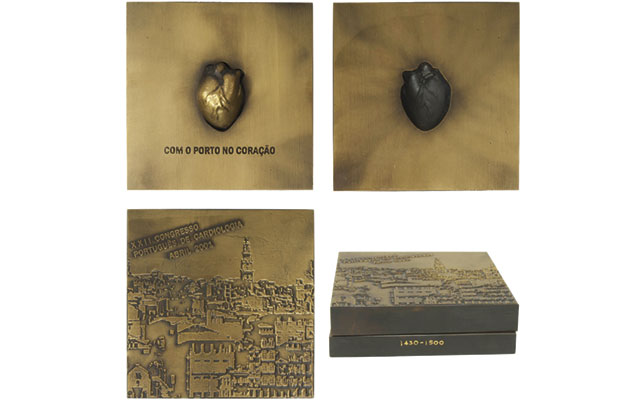 The 22nd Congress of Portuguese Cardiologists met in April 2001, and issued an official medal in three parts. Two halves open to reveal a removable, anatomically correct heart. At 76 ounces, the entire medal weighs 15 times more than a typical bronze medal. 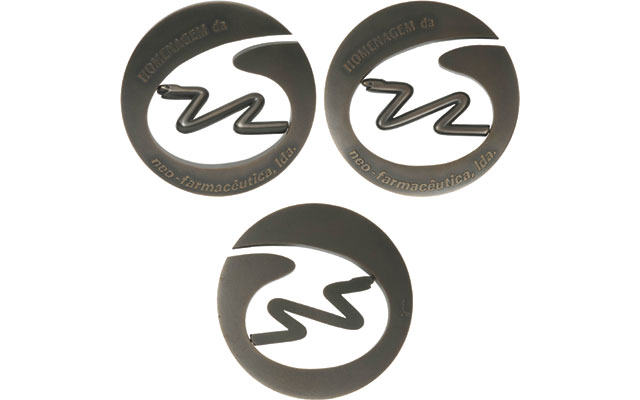 A Portuguese pharmaceutical company issued a bronze medal that contains a spinning lightning bolt-shaped snake in the center. The snake was a nod to the ancient medical caduceus, and the medal, made to promote a new medicine. 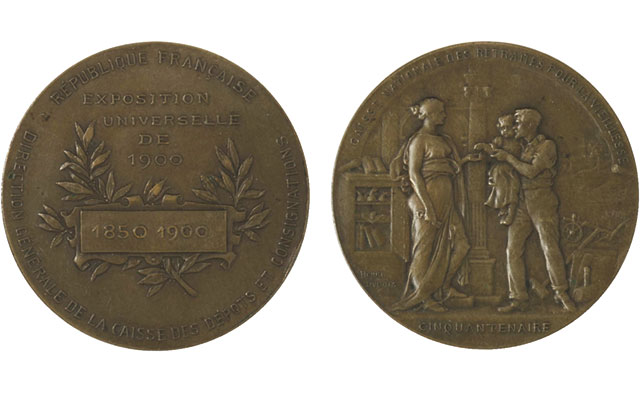 This bronze medal dated 1900 celebrates the 50th anniversary of a pension bank in France and encourages saving. It shows a small child offering her coins to be saved. 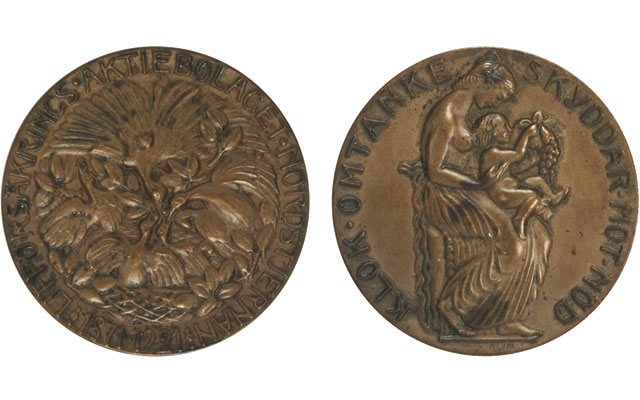 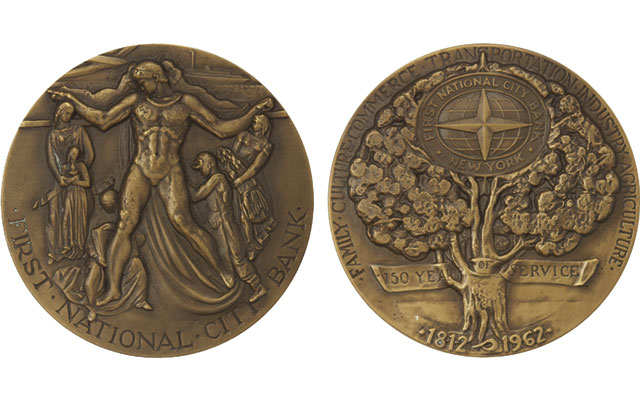 This 3-inch medal was manufactured by the Medallic Art Co. to commemorate in 1962 the 150th anniversary of the First National City Bank, New York. The central figure represents the American spirit and is surrounded by representations of family, culture, commerce, transportation, industry, and agriculture. 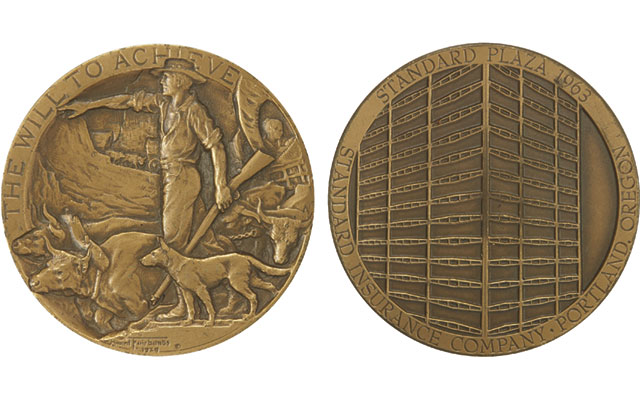 This high relief 1963 Standard Insurance medal from Portland, Ore., features an All-American vignette by Avard Fairbanks (1897 to 1987), a sculptor who once taught art at the University of Oregon Eugene.

Designed to amaze and advertise, organizational art medals (from nonprofit and for-profit businesses and professional organizations) typically strive to inspire feelings of security and trust.

This is especially true for banking, insurance and pharmaceutical companies. As they deal with issues of money, security and health, they must show themselves to be strong and trustworthy. However, their medals can only accomplish this if they can first catch the eye of the consumer and encourage further word-of-mouth advertising; hence the impressive size and creative designs.

Organizational art medals come from many different nations but many of the most innovative examples hail from Portugal and the United States, along with nations like France, Finland, Denmark, Sweden, Argentina, and Italy.

Medalhistica Disart is a company in Porto, Portugal, that manufactures medals and decorations. Founded in 1935, its Facebook page displays the motto: “The Art of the Medal for 79 Years.”

A 1985 Disart promotional bronze medal contains two movable halves totaling 90 millimeters in diameter that are split by a smaller 12-millimeter medal that spins. The larger halves have wording that celebrates the company’s 50th anniversary while the lettering on the smaller medal translates as “The present for the future.”

The 22nd Congress of Portuguese Cardiologists met in April 2001 and issued a three-part square medal to promote the event, and to provide the doctors a souvenir. The obverse of the medal is the cityscape of Porto with the iconic Clerigos Tower. The text inside the medal translates “With Porto in the Heart.” The removable 33-millimeter center is shaped like a human heart with anatomically correct details.

Sizewise, this medal is in a class by itself. A typical 3-inch bronze medal weighs 4 to 6 ounces and has a width of about 5 millimeters. This 3.75-inch square (97-millimeter) behemoth tips the scales at 76 ounces and is 27 millimeters thick. It is signed by José Joaquim Rodrigues. Born in 1936, he is one of Porto’s most famous medallic artists.

A Lisbon bank, Fomento Nacional, celebrated its 20th anniversary in 1980 with a medal that incorporates — what else — coins. The 85-millimeter-diameter medal has two moving coin-like objects that remain within the medal. This small feat of engineering is enough to cause consumers to wonder how the coins remain on the medal.

Vertical bars extending beyond the medal’s edge on both sides give it a modern look but the antiqued bronze finish conveys age and stability. It is signed by Dorita de Castelo-Branco (1936 to 1996).

Neo-Pharmaceuticals, a Portuguese company, issued a medal to advertise its product called Homenagem. Their undated 90-millimeter bronze medal is a flowing circle that contains a spinning lightning-bolt-shaped snake in the center. The snake, a nod to the ancient caduceus, has long been a symbol for hospitals and pharmacies. The text reads, HOMENAGEM DA, NEO-FARMACEUTICA, IDA, and the medal is signed by Girao.

From a pension bank in France, a 35-millimeter bronze medal dated 1900 celebrates the bank’s 50th anniversary and encourages saving. Signed by Henri Dubois, it shows a small child in her father’s arms who surrenders her coins to an allegorical female figure representing savings. This was created for and issued during the Universal Exposition in Paris.

It is illustrated with family values in the form of a mother partially draped in classical fashion and feeding fruit to her child. The other side is a nest of birds caring for their young. The wording translates as “Wise concern keeps away trouble.”

Many of America’s most beautiful bronze organizational medals were made during the heyday of the art form, between 1920 and 1970. One 3-inch masterpiece in high relief was manufactured by the Medallic Art Co. to commemorate the 150th anniversary (1812 to 1962) of the First National City Bank of New York.

The large nude figure with arms extended in a protective stance is meant to represent the spirit of the American people. He is surrounded by figures that represent: Family, Culture, Commerce, Transportation, Industry, and Agriculture. The medal was created in Barcelona by Enrique Monjo (1896 to 1976), a Spanish sculptor.

Another MACO classic organizational art medal was commissioned by Standard Insurance of Oregon in 1963 and sculptured by Avard Fairbanks (1897 to 1987). This 70-millimeter medal has an all-American vignette of a wagon train going through a mountainous pass, the wagons pulled by oxen, and one of the men, dog by his side, pointing the way. A larger version of this same design, called “Will to Achieve,” was made in 1929 for Standard Insurance and is 2.5 feet across.

Radio, television, magazines and the Internet have eclipsed medals as advertising outlets for businesses today, but for a time, the organizational art medal thrived. Luckily for us, a few are still made today, and many more vintage examples survive to be collected.