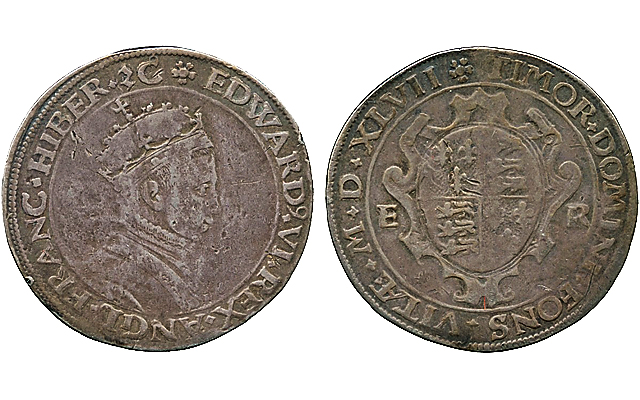 According to Baldwin & Sons, it is “one of the most spectacular pieces of engraving art of the time.”

Joe Bispham researched the series, publishing “The Base Silver Shillings of Edward VI” in the British Numismatic Journal in 1985. Bispham suggests that the coin was an early prototype piece for coinage of this denomination and may well have been produced for presentation.

“This piece was produced at a time when the young boy King’s name was not upon his coinage but still in the name of his father, King Henry VIII, due to the poor debased state the coinage had been left in for the silver and gold denominations,” according to auction firm, citing Bispham’s research.

Baldwin’s catalog adds: “A fine silver pattern of such intricate engraving detail must have been produced to show that the new King, though of a young age, was powerful and also the new Head of the Church of England.”

The pattern was struck at the Tower Mint in London.

Though the coin displays some “weakness in parts,” the auction firm grades the piece Good Fine.