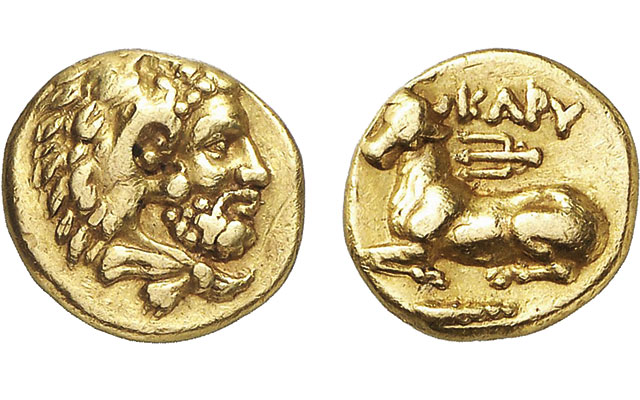 One of at least a dozen examples of a circa 313 B.C. gold drachm from Karystos on Euboia struck during the War of the Diadochs is offered in Gorny & Mosch’s March 9 auction.

When Alexander the Great died on June 11, 323 B.C., his empire disintegrated, setting off decades of warfare.

A circa 313 B.C. gold drachm from Karystos on Euboia, struck to pay the forces fighting the Diadochi, Alexander’s rival generals, family and friends, highlights Gorny & Mosch’s March 9 auction No. 228.

The auction is one of four over four days following the Numismata Munich show.

During the War of the Diadochs (315 to 311 B.C.), Antiogonos I Monophthalmos sent his nephew Ptolemaios to Greece, where he formed an alliance with anti-Macedonian factions in various city-states.

Ptolemaios united these factions to revolt against Kassander, wresting most of Greece from Macedonian control. His effort began in Boiotia and Euboia, the latter being where this coin was struck, likely to help finance the anti-Macedonian cause.

Both gold and silver versions are known, according to J.R. Melville Jones in “The Date of the Gold Drachma of Carystus” (Numismatic Chronicle, 1980).

“The dies for the silver coins were prepared by an artist of only mediocre talent, while the gold ones show the work of a craftsman of the first rank,” Jones wrote.

The coin in the auction is one of at least 12 examples known.

For more about the auction, visit the firm's website.