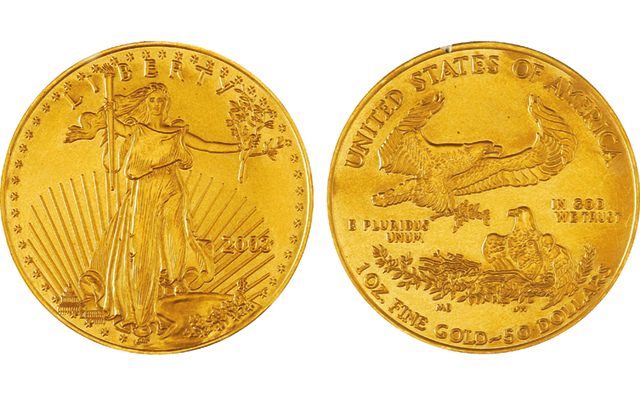 What was believed to be a 2003 American Eagle gold bullion coin used in jewelry has been determined to be counterfeit. 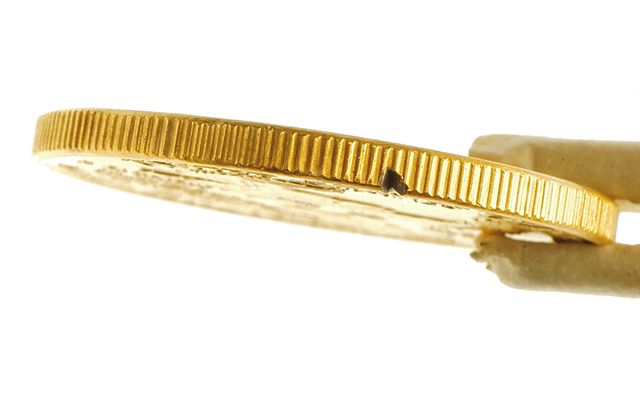 A 2003 American Eagle 1-ounce gold bullion coin that an Ohio dealer received in a genuine 14-karat gold coin bezel from a customer has been identified as fake.

Donald Herres from Dollar Towne in Bellbrook, Ohio, said April 21 that he believes he received the piece from an unknown customer sometime earlier in the month.

The authenticity of the item came into question, Herres said, after he shipped it and other bullion items to a bullion dealer. Representatives for the bullion dealer didn’t think the 2003 piece was genuine and returned it to Dollar Towne.

Herres said he subsequently notched the edge and placed a drop of nitric acid on the notched area, turning it green, an indication of base metal under gold plating.

Herres said he also had the piece examined and tested by a large bullion liquidator in Ohio that preliminarily determined the piece was likely heavily plated with gold over an alloy of base metals.

While the fake coin is the same diameter as a genuine coin at 32.7 millimeters, the weight of the fake is slightly heavier, at 34.194 grams, versus 33.931 grams.

The color of the counterfeit appears darker than a genuine gold American Eagle and the surfaces of the fake don’t exhibit the normal metal flow lines one would encounter on a genuine coin.

Herres figures he’s out at least $1,300 from the bogus piece, but wanted to alert collectors and other dealers that such counterfeits are in the marketplace.