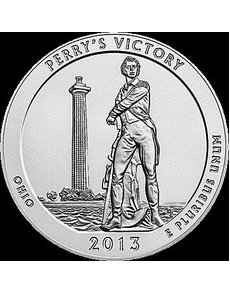 The 2013 Perry’s Victory and International Peace Memorial 5-ounce silver bullion coins go on sale to the U.S. Mint’s authorized purchasers June 3, three days before the collector Uncirculated version are to be offered to the public.

The authorized purchasers can purchase the bullion coins for the spot price of the metal per ounce on the London market, times 5 ounces, with an added premium of $9.75 per coin in the purchase price.

The coins may then be sold by the authorized purchasers into the secondary market to other dealers, collectors and investors.

Unlike the Uncirculated numismatic version, which bears the P Mint mark of the Philadelphia Mint, where both versions of the 5-ounce silver coins are struck, the bullion versions bear no Mint mark.

The Uncirculated collector 5-ounce coins currently offered by the Mint are being sold at $179.95 each, subject to change depending on changes in silver prices.

The Uncirculated 2013-P version of the Perry’s Victory and International Peace Memorial coin is scheduled to be offered by the U.S. Mint beginning at noon Eastern Daylight Time June 6.

The Uncirculated Great Basin coin is slated for a June 27 release.

As of May 30, the U.S. Mint had not announced specific release dates for the Uncirculated 5-ounce Fort McHenry and Mount Rushmore coins, stating only that the two coins would be offered sometime in August and November, respectively. ¦