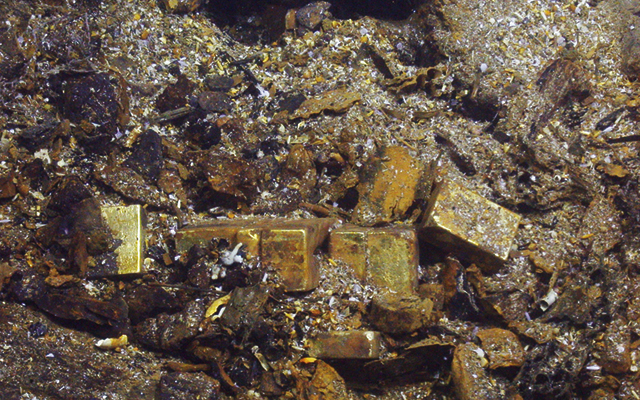 Among the items recovered over more than four months of salvage operations are gold bars located near the stern of the sunken SS Central America. 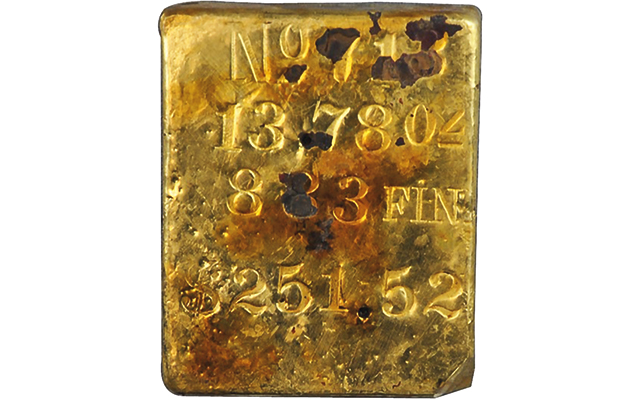 The smallest gold bar recovered thus far from the latest recovery operations is this 13.78 ounce, .883 fine piece fabricated by Kellogg & Humbert, Assayers. The bar was valued at $251.52 at the time it was made in the mid-19th century.

More than 1,000 additional gold coins were recovered by Odyssey Marine Exploration from the 1857 wreckage of the SS Central America between July 21 and Aug. 15, bringing the total number of gold coins recovered since April to 3,096.

Gold and silver coins, gold dust, nuggets and jewelry continue be recovered by Odyssey from the 1857 wreckage of the SS Central America.

The vessel sank off the coast of South Carolina on Sept. 12, 1857, during a hurricane.

Odyssey filed its latest inventory report with United States District Court for the Eastern District of Virginia in Norfolk. The complete inventory of items recovered can be found here.

After a scheduled port call, the Odyssey Explorer salvage vessel is now back at the SS Central America site conducting operations.

A wide variety of denominations, dates and Mint marks are represented among the coins in the recent inventory report.

While the bulk of the most recent inventory of recovered treasure comprises 1856-S and 1857-S Coronet gold $20 double eagles, large numbers of gold dollars through double eagles have also been recovered, including Indian Head gold $3 coins.

Some of the coins are counterstamped.

The inventory of items most recently recovered also includes California fractional gold and pioneer gold coins struck by a number of private issuers, along with U.S. silver coins, and gold and silver foreign coins.

Among the most recently recovered items are:

Also recovered, in addition to hundreds of U.S. and foreign silver coins, were framed and unframed ambrotype and daguerreotype photographs, some possibly depicting passengers who lost their lives when the SS Central America sank.

The wreck was identified in 1987 and recovery operations took place from 1988 to 1991 by the original salvors, Columbus-America Discovery Group.

On March 3, 2014, Odyssey announced that it was awarded an exclusive contract to return to the site for further excavation.

Recovery Limited Partnership is the court-appointed salvor-in-possession of the shipwreck.

Evans serves as one of RLP’s representatives on the project and has been aboard the Odyssey Explorer since operations began in April 2014, cataloging the gold as it is recovered.