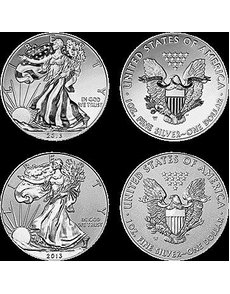 Sales opened at noon Eastern Daylight Time May 9 and are scheduled to end at 5 p.m. EDT June 6. The sets are being offered at $139.95 each.

The two-coin set celebrates the 75th anniversary of the West Point Mint.

At approximately 3 p.m. EDT each weekday, the U.S. Mint posts cumulative sales totals for the sets on a sales odometer posted at www.usmint.gov.

Among those totals were orders for sets placed by customers attending the May 9 to 11 American Numismatic Association National Money Show in New Orleans. The U.S. Mint recorded 21 orders representing 7,513 sets, for a total price of $1,051,444.35.

According to U.S. Mint officials, one customer at the New Orleans convention placed an order for 6,000 sets, representing $839,700 of the show total in a single purchase.

The Enhanced Uncirculated coins are struck with multiple levels of polishing and laser frosting techniques on specific elements to create a unique appearance, according to the Mint.

The two coins are available only in the set and will not be offered individually, according to U.S. Mint officials.

The facility first began operations as one of the Bureau of the Mint’s bullion depositories in 1938. Coinage presses were installed during the 1970s so the facility could strike minor coinage for circulation. It began striking commemorative coins in 1984 and American Eagle bullion coins in 1986.

The West Point facility was accorded full Mint status in 1988.

The facility is now a major producer of bullion and commemorative coinage.

The Mint offered a daily sales odometer for the 2012 set — the first ever used by the U.S. Mint.

On Dec. 6, 2012, U.S. Mint officials announced the final but unaudited totals had been cut to 224,981 because of cancellations of orders, on the part of either the Mint or the customer. ¦