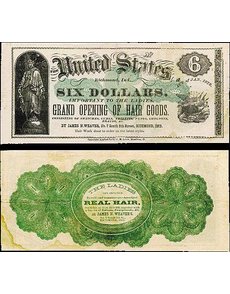 James N. Weaver of Richmond, Ind., is among a group of “odd” issuers of advertising notes. Sometime around 1872, he issued a $6 advertising note promoting “switches, curls, frizetts, puffs, chignons, braids.” These hair pieces for ladies fit in with Weaver’s profession as a barber.

Advertising notes have always been an interest of mine. These notes were typically designed to at least remotely resemble legitimate notes in circulation. Some were better likenesses than others but the goal was the same — capture the recipient’s attention long enough to deliver the issuer’s advertising message.

Some advertising notes served only this purpose while others actually offered the holder some financial incentive to make a purchase.

Although the note is clearly a nongenuine denomination, it bears at least a passing resemblance to the 1863 $5 legal tender note that was still in circulation when these advertising notes were being passed out.

While most of advertising notes were issued by dry goods merchants and other similar firms, it’s always interesting to run across the occasional “odd” issuer. Weaver and his notes fit the bill.

According to the 1870 and 1880 census, Weaver was a “barber.” In addition, another family member or boarder was listed as a “hairdresser” in both census records.

And this fits in with the products being promoted by the note — hair goods! This was a bit surprising to me as a male. I had always assumed that all those fancy female hairdos in 19th century America were completely the “real thing.”

As it turns out, Weaver was busy producing a variety of hair pieces such as “switches, curls, frizetts, puffs, chignons, braids & c.” that could be added to a lady’s basic hairdo (they still exist today under the same names).

The back of the note indicates that most of these were made of real hair, with “switches” selling for the lofty sum of from $3 to $20. In 1872 this represented a significant investment in beauty.

It also makes me wonder — what happened to all the hair that Weaver and his hairdressers removed from female customers’ heads during the course of a day’s business?

Just another mystery connected to obsolete bank notes! Collectors should be on the lookout for odd advertising notes the next time they peruse a dealer’s stock.