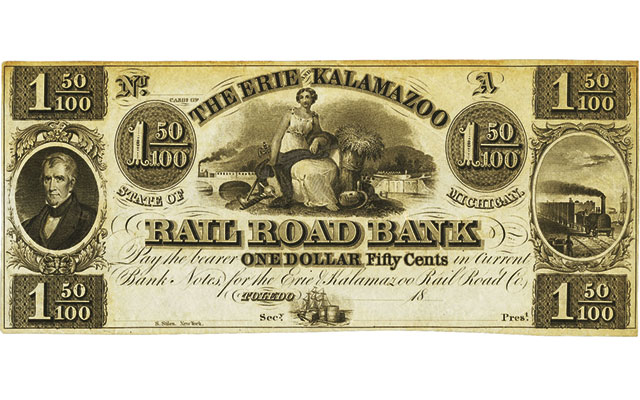 Odd denomination remainder scrip note was printed for The Erie and Kalamazoo Rail Road Bank, which was in existence in the early 1800s.

The $1.50 scrip note was printed for The Erie and Kalamazoo Rail Road Bank, the banking arm of the early Michigan railroad, according to the catalog description. The auction firm graded the note as Very Fine “with a bit of very light toning around the margins.”

The Erie and Kalamazoo Rail Road opened Nov. 2, 1836, and connected Port Lawrence, Mich., with Adrian, Mich. (Port Lawrence later merged with another community to become Toledo, Ohio, and Congress ceded the disputed border region in which it resided from Michigan to Ohio.) The bank went into receivership in 1846.

According to a historical marker in Blissfield, Mich., the first trip from Toledo to Adrian was made by a horse-drawn car. From 1852 to 1857 the railroad line was part of the Michigan Southern Railroad and served as a “link in the only unbroken rail route from the East Coast to Chicago. As a part of the Lake Shore and Michigan Southern, the New York Central, the Penn Central and the Conrail systems, ‘The Old Road,’ as it continued to be known, carried passengers until November 1956.”