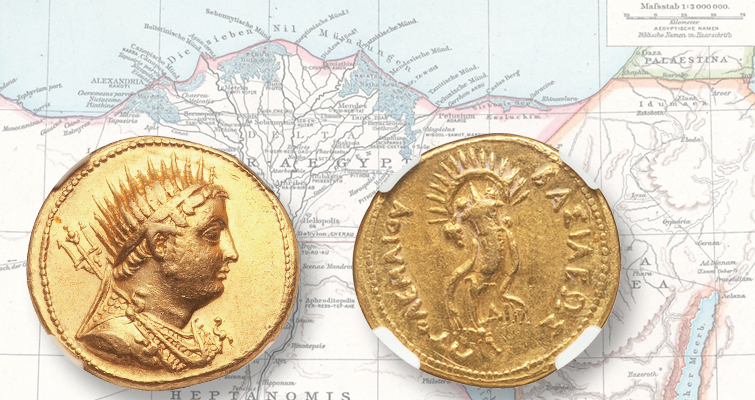 An army is built on its stomach, the saying goes, but a ruler can’t feed and maintain an army without money.

In ancient times, that meant precious metal, and in Ptolemaic Egypt, that meant the mnaieion or octodrachm, an enormous denomination with huge purchasing power.

In Heritage Auctions’ April 24 auction, a gold mnaieion of Ptolemy III Euergetes, posthumously issued circa 219 to 217 B.C. in Alexandria for Ptolemy IV, realized $20,400, with the 20 percent buyer’s fee.

The coin measures 27 millimeters in diameter and weighs 27.74 grams, comparable in diameter to a Presidential dollar, but slightly heavier than a Morgan dollar.

A bust of deified Ptolemy III appears on the obverse. A cornucopia and royal diadem appear on the reverse.

No other kingdom or empire in the ancient world could produce such large gold coins, and this display of economic clout drew thousands of mercenary soldiers into Egypt’s service, according to Heritage.

This large and powerful army was put to maximum use by the third king of the Ptolemaic dynasty, Ptolemy III Euergetes. Shortly after inheriting the throne of the Pharaohs, he launched a massive invasion of the neighboring Seleucid Kingdom of Syria. Crushing all resistance, he even reached Babylon, where he proclaimed himself King of Kings. Ptolemy III’s portrait appears on gold mnaieions struck by his son, Ptolemy IV Philopator, who succeeded him in 221 B.C.

“Although we possess price and wage data from Ptolemaic Egypt, our modern standard of living is so much higher that comparisons may not be entirely reliable,” Catharine Lorber wrote, for Heritage, in providing some perspective of the enormous purchasing power of mnaieions.

An ordinary soldier in third-century Ptolemaic Egypt was paid 1 drachm per day, thus 30 drachms per month. (The Egyptian month was exactly 30 days long.) The mnaieion was equal to a soldier’s pay for 100 days.

Because of different pay grades and periods of use, Lorber puts the coin’s modern purchasing power between $4,000 (its opening bid) and $13,000, both figures eclipsed by the sale price. 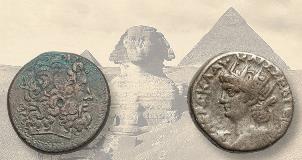 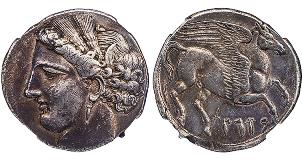 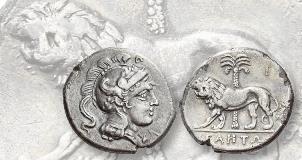 An ‘affordable’ ancient coin from a pedigreed collection