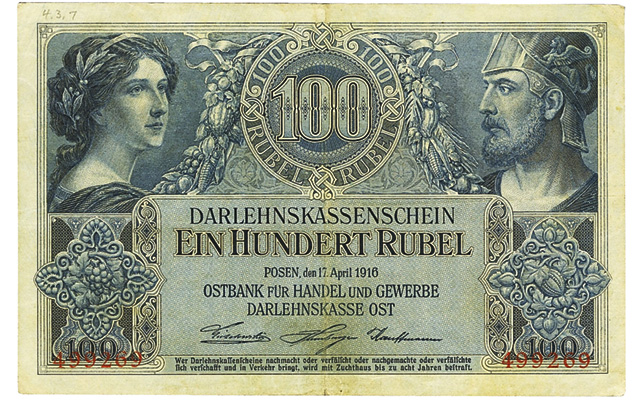 A collection of occupation notes would make a new and different avenue to pursue for the adventuresome collector.

A six-note lot of German occupation notes from World War I sold for $94 on Dec. 30, 2014, in the Heritage Auctions Tuesday Internet Currency Auction.

The lot featured one note from each denomination: 20 and 50 kopeks and 3, 10, 25 and 100 rubles. The notes were graded Fine or better by the auction firm.

When Germany occupied Lithuania and other parts of Eastern Europe in 1916 during World War I, it issued notes in denominations of kopeks and rubles for use in Lithuania, Latvia, Belarus and East Poland.

When a military force occupies a nation, the occupiers often issue special currency for use by the occupied area’s residents.

Occupation notes have been issued by various nations during battles of all sizes. In another such instance, notes were produced for Italy’s occupation of Albania in 1940.

Italian dictator Benito Mussolini had long had his eyes on Albania, for its strategic military location. Several battles took place before Albania’s parliament agreed to Italy’s demand to surrender.

An example of Italy’s occupation notes, in the 100-granga denomination and graded Very Fine–Extremely Fine by the Heritage, sold for $182.13 on Jan. 13, 2014, in Heritage’s World Currency Signature Auction in Orlando, Fla.