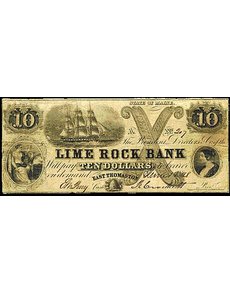 A $10 note from the Lime Rock Bank of East Thomaston, Maine, signed in ink and dated June 1, 1848, is the only note of the bank that the author has ever had the opportunity to purchase. The cost — $1,750, for a great rarity.

Last week, I discussed obsolete currency issued by state-chartered banks from 1782 to 1866. For many scarce issues — say, no more than 50 to 100 known — choice examples can be purchased inexpensively, often for $25 to $100 each. These prices will get you notes that have been signed in ink by the bank cashier and president, and were used in circulation. Great rarities are often available for, say, $500 to $2,000.

Choice grades range from Fine to Extremely Fine. It is a seeming paradox that Uncirculated bills are generally worth lesser amounts and are not as desired! Why? Because these notes were never signed and never issued.

After many of the banks stopped paying out their bills, thousands of notes often remained in their vaults, sometimes in uncut sheets of four notes each. Many varieties are very common, certain bills of the Canal Bank of New Orleans being an example. I once had a chance to buy 7,000 four-subject Uncirculated sheets for $2 each.

Another curious aspect of obsolete bank notes is that many bills were once common, but not a single example exists today. Where did they all go? Who knows.

At regular intervals, interesting finds surface. Often these seem inexpensive to anyone who has grown up with rare U.S. coins, for which a unique example might be unaffordably priced at untold thousands of dollars. The note illustrated above from Maine cost me $1,750. I have never seen or heard of another!

One reason that obsolete notes are so inexpensive, relatively speaking, is that no current reference books are available. The last to treat Maine notes was by James A. Haxby and was published 31 years ago.

If you want notes that are really inexpensive, try collecting a series for which there are no reference books at all. Civil War scrip notes of many different states beckon — say Massachusetts, New Hampshire and Connecticut for starters. Of course, it takes a bit of courage to sail into uncharted numismatic waters, but that is part of the fun.

You can always “retreat” to, say, Morgan dollars, for which there are a dozen or more price guides, no need to learn about grading (what with third-party graded coins), no need to do much besides write a check.

And coins are Mint State, not ragged Very Good!

How do I get started with collecting obsolete notes? Simple! Go to the Professional Currency Dealers Association (website found at www.rarecurrency.net/) and poke around on some of the dealers’ sites you find.