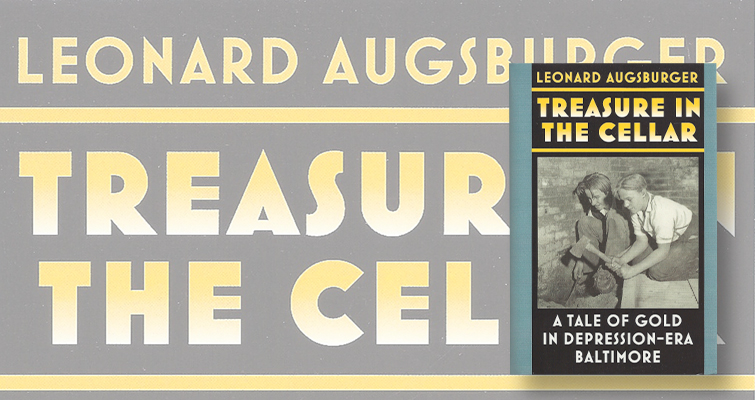 Len Augsburger’s book Treasure in the Cellar relates the tale behind the discovery of gold coins in a Baltimore cellar by two teen boys.

Every child dreams of buried treasure: digging, with your best friend, until your shovels pierce a rotted chest, and a rivulet of gold coins spills into the fresh dirt. Delightful childhood fantasies, but buried treasure exists only in storybooks, right? Wrong. Two best friends once unearthed hundreds of gold coins in Baltimore, and not along the waterfront, but in a cellar!

Fourteen-year-old Theodore Jones lived in the tenement apartment building at 132 S. Eden St. He befriended 15-year-old Henry Grob, who lived a block away. On Aug. 31, 1934, the two formed a boy’s club, put the nickel-apiece dues into a cigar box, and decided to bury the box for safekeeping. They descended into the cellar of 132 S. Eden, and dug a hole along a back wall. About a foot down, they hit a corroded gallon-sized can, which, after being struck with an ax, disgorged gold coins!

The boys surrendered these coins, amounting to $11,424 in face value, to the Baltimore Police. A “Baltimore gold rush” ensued, with several people filing legal claims for ownership of the hoard, while others dug through the cellar, hoping to discover treasure the boys had missed. Then, on Sept. 2, 1935, the Jones family apartment at 132 S. Eden was robbed of $3,600, an astonishing sum for such a poor family.

The boys explained that this was Theodore’s share of a second discovery they had made in the cellar, in May of 1935, in the only spot that treasure-hunters hadn’t searched. This story seemed fishy, but the boys eventually prevailed in the legal arena, and also won the inevitable appeals. The coins were auctioned for their benefit. The last of the lawsuits was settled in January of 1938. By then, Theodore was in trouble with the law, Henry was dead, and the costly legal proceedings had dramatically reduced their hauls.

This was the story told for more than 70 years, until author Len Augsburger took up this numismatic “cold case.” He traveled repeatedly to Baltimore, visited 132 S. Eden (today a foundry), and carefully researched the court records. His book, Treasure in the Cellar: A Tale of Gold in Depression-Era Baltimore, identifies the likely creator of the hoard, demonstrates that the boys’ “second find” of coins was a cover story, and traces the surprising outcomes of the case down to the present day.

Augsburger also tells a sad tale about the auction of the hoard coins conducted by Baltimore stamp and antiquities dealer Perry Fuller on May 2, 1935. Many were damaged by clumsy cleaning (some pried apart with a butter knife), and 39 of the gold dollars had unreadable dates. A skillful cataloger might have compensated for these problems by emphasizing the hoard’s history and romance, but Fuller was no Q. David Bowers. He divided 3,508 coins into 438 lots, and his descriptions consisted entirely of the coin’s dates and conditions. Far from hyping them, Fuller, in his introduction to the sale, admitted to undergrading some pieces: “The coins are in unusually good condition. Many could be described as uncirculated although we have described them only as Fine to Very Fine.” The first lot, an 1850 Coronet double eagle, was knocked down for $36, but most realized only the content of the gold. The auction, disappointingly, brought less than $20,000.

Fuller personally fared even worse: later in 1935, he declared bankruptcy.

Few of the Baltimore hoard coins can be positively identified today, so if you want an artifact of this remarkable event, buy a copy of the Fuller catalog. Numismatic booksellers occasionally offer one for $150 or so.

The Johns Hopkins University Press will sell you a copy of Treasure in the Cellar for $26, and you can read this strange-but-true tale of treasure, triumph and tragedy, told by a master numismatic historian.