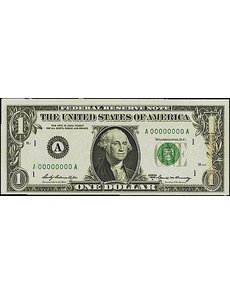 This Series 1969A $1 Federal Reserve note printed for the Federal Reserve Bank of Boston has solid serial number A00 000 000A, possibly the only one in private hands. Image courtesy of HeritageAuctions.com.

A Series 1969A $1 Federal Reserve note with solid-zero serial numbers will be offered in the Jan. 8 to 14 Heritage Currency Signature Auction at the Florida United Numismatic convention in Orlando, Fla.

The note is graded Choice Uncirculated 64 by Paper Money Guaranty and is expected to sell for $50,000 or more, according to Michael G. Moczalla of Heritage Auctions.

The note “originally came to light at the 1973 [American Numismatic Association show in Boston],” Moczalla said. “The note was originally discovered by Tom Morrissey who was very involved with the ANA at the time of its discovery.”

Morrissey, who died in 1977, started working for the First National Bank of Boston in 1955, according to an article published Aug. 24, 1972, in the Town Crier in Tewksbury, Mass.

The red mark was an alert to printers at the Bureau of Engraving and Printing to remove the note because at that time notes with all zeroes in the serial number were removed and burned.

“To my knowledge this may be the only regular issue Federal Reserve note exhibiting a solid zero serial number,” according to Moczalla.

Included with this lot are the inside and outside package labels that accompanied the “brick” and indicated the serial number range of the 4,000 $1 FRNs enclosed.