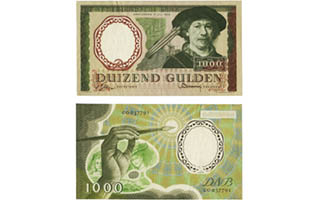 The face of a 1,000-gulden note issued in 1956 by the Bank of Netherlands features a vignette of a self-portrait of the 17th century Dutch master Rembrandt Harmenszoon van Rijn, among other design elements taken from his life and artistic works. The note is to be offered in a Heritage auction April 24, 2014.

For many collectors, the artistry of the designs on paper money is what first catches their eye. So what’s not to love about a piece of paper money that depicts portions of paintings by the 17th century Dutch master Rembrandt Harmenszoon van Rijn?

A Netherlands note displaying his artwork will be among the more than 700 lots of world paper money to be offered April 24, 2014, during the Heritage World Currency Signature Auction scheduled during the Central States Numismatic Association 75th Anniversary Convention April 23 to 26 in Schaumburg, Ill. The auction will be held at the Renaissance Schaumburg Convention Center, in Schaumburg.

The face of a 1,000-gulden note issued in 1956 by the Bank of Netherlands features a vignette of a self-portrait of the artist, several paint brushes and an artist’s palette. Also on the face is a small image of a windmill, taken from one of Rembrandt’s etchings.

The back of the note has small portraits of his son Titus and his wife, Saskia, along with a portion of Rembrandt’s painting Mountain Landscape with a Thunderstorm, which can be seen below the portraits. An artist’s palette and a hand holding a paintbrush appear in the foreground.

Due to its high face value when issued, not many of these notes were saved, according to the catalog. PMG graded the note Extremely Fine 40 Net for minor rust. The note, from the Northern Lights Collection, is estimated to bring $1,000 to $1,500.