Not all folded planchet errors are foldover strikes 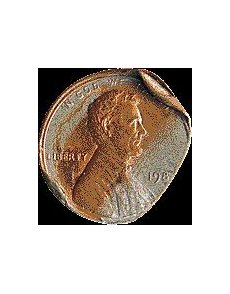 This Lincoln copper-plated zinc cent, struck some time in the 1980s, is an in-collar foldover strike. The planchet, momentarily standing (or spinning) on-edge, was folded in half by the impact of the dies. 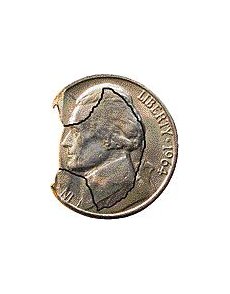 The hatchet-shaped outline of the struck-in metal flap on the first 1964-D Jefferson 5-cent coin appearing at the upper right is seen in the form of a narrow fissure, outlined here in black. 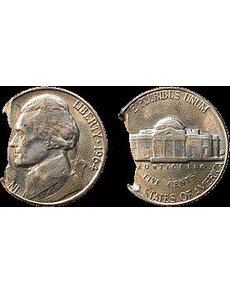 A piece of Mint machinery tore up a flap of metal from the planchet on which this 1964-D Jefferson 5-cent coin was struck. The flap was folded over and struck into the planchet. 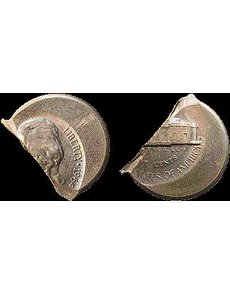 The same piece of machinery completely tore off a large piece of the planchet on which another 1964-D Jefferson 5-cent coin is struck.

Collectors of minting errors occasionally come across terms that have fallen into disuse.

One such moniker is the “folded planchet error.” It has largely been supplanted by the label “foldover strike.” A foldover strike is a coin that is struck on-edge and folded over in the process.

A rather unusual example is shown here in a Lincoln cent struck some time in the 1980s. It’s an in-collar foldover strike. When it was struck, the planchet was standing up in the far northwest quadrant of the striking chamber. The side of the planchet that faced toward the interior of the striking chamber did so toward the southeast. It was bent perfectly in half by the force of the strike, with the bend also occurring in the southeast direction. The edge of the folded-over flap can be seen just inside the design rim on the obverse face.

Given the precise three-dimensional positioning required to generate an in-collar foldover strike, it’s not surprising that I’ve only come across three examples in my years of collecting.

General abandonment of the term “folded planchet error” may be due to its being a less precise term than “foldover strike.” But it’s fortunate in another sense. Coinage dies are not the only machine parts that can fold a planchet in two.

Folding can also occur before the strike. Pre-strike damage that folds over part of a blank or planchet is rare, but it’s important to recognize its existence and the potential for misidentification.

I’ve chosen to illustrate this category of damage with a 1964-D Jefferson 5-cent coin. Part of the planchet was torn up and folded over onto what would ultimately become the obverse face. The flap — free at both ends but connected in the middle — was struck into the planchet.

The coin weighs 4.91 grams —slightly underweight (it should weigh 5 grams) but still within the normal range of variation for this denomination.

I have no idea what piece of machinery generated this damage, but it’s not unique. I’ve seen at least one other 5-cent coin with the same kind of struck-in flap. Neither of these coins was correctly diagnosed and described. While neither was pegged as a foldover strike (or folded planchet error), they were also not correctly identified as examples of pre-strike damage. Coin dealers and grading services are most likely to identify such errors as “defective planchets,” “straight clips” or “ragged clips.”

Whatever piece of machinery is responsible for this damage, it more often tears off the flap completely. This is what happened to a second 1964-D Jefferson 5-cent coin illustrated here.

It was sold to me years ago as an off-center strike on a straight clip planchet by a prominent error dealer. The ends of the straight margin are beveled on both faces and taper to a sharp edge.

I’ve encountered this more severe type of pre-strike damage on denominations from cent to quarter dollar. The most recent example is a 1999-P Roosevelt dime that can be found on the Combined Organizations of Numismatic Error Collectors of America website (http://coneca
online.org/content/recentfinds.htm).

Based on the evidence provided by the different pre-strike planchet damage coins encountered, evidently, the minting mechanism responsible for this planchet damage has been in use for decades.