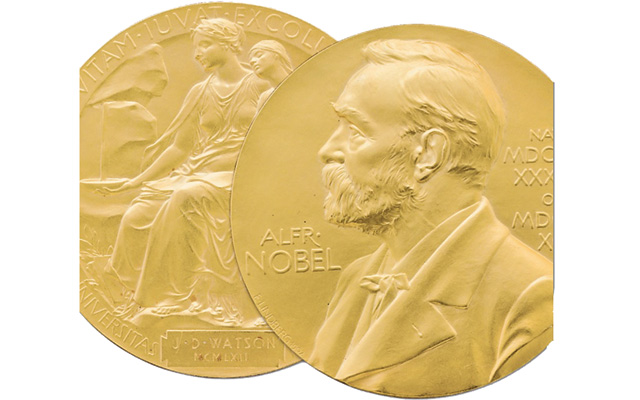 The 1962 Nobel Prize gold medal for Physiology or Medicine awarded to Dr. James D. Watson is being sold by Christie's in a Dec. 4 sale in New York.

Dr. James D. Watson, one of three 1962 recipients of the Nobel Prize for Physiology or Medicine for co-discovering the structure of DNA, is offering his gold medal for auction Dec. 4 by Christie's in New York.

The auction is to be held in Christie's New York offices at 20 Rockefeller Plaza.

The medal is estimated to bring between $2.5 million and $3.5 million, according to Christie's.

The gold medal presented to one of Watson's co-recipients, Dr. Francis Crick, along with Crick's Nobel Prize diploma, brought $2,270,500 in an April 11, 2013, sale in New York by Heritage Auctions. Dr. Crick's medal and diploma were purchased by Jack Wang, the chief executive officer of Biomobie, a biomedical firm in Shanghai, China.

Watson's medal is identified by Christie's as being the first to be sold by a Nobel Prize recipient while the recipient is still alive.

Watson, 86, says he plans to use half the after-tax auction proceeds to continue his philanthropic donations, which include the Cold Spring Harbor Laboratory on New York's Long Island, the University of Chicago and Clare College Cambridge. Watson is chancellor emeritus and a research scientist at the New York laboratory, working on a cure for incurable cancers.

Clare College Cambridge was where Watson and Dr. Crick lived when on Feb. 28, 1953, they put together the basic features of the DNA double helix.

Waton, Crick and a third researcher who shared the 1962 prize, Dr. Maurice Hugh Frederick Wilkins, received their medals from the hand of King Gustav VI Adolf of Sweden at the Stockholm Concert Hall on Dec. 10, 1962.

For more information on the sale, visit the Christie's website. The online catalog for the sale can be accessed here.