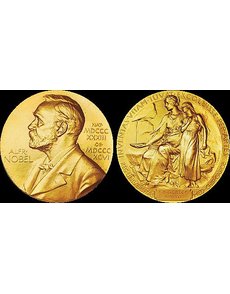 British scientist Dr. Francis Harry Compton Crick’s gold 1962 Nobel Prize for Physiology or Medicine, for co-discovering the structure of DNA, was sold April 11 at auction in New York City to a Chinese buyer for $2,270,500.

The auction was held at the Ukrainian Institute of America at The Fletcher-Sinclair Mansion.

“Dr. Crick’s Nobel Prize medal and diploma will be used to encourage scientists unraveling the mysteries of the Bioboosti, a bioelectrical signal that may control and enable the regeneration of damaged human organs,” Wang said after the auction. “The discovery of the Bioboosti may launch a biomedical revolution like the discovery of the structure of DNA. It may recover damaged human organs and retard the aging process, achieving the goal of self recovering from disease and poor health conditions.”

Heritage Auction’s President Greg Rohan said April 11 that three bidders participated on HALive before the auction started. The opening bid of $250,000 had risen to $280,000 when the live bidding began.

“From $1 million to the final hammer of $1.9 million, the bidding was back and forth in $100,000 increments between two Europeans who had flown in together for the auction, and Jack Wang who flew in from Shanghai and was the successful bidder at $1.9 million hammer, which is $2,270,000 including the buyer’s premium [of 19.5 percent].”

Rohan said the auction gallery was packed with bidders who were also there for the manuscripts portion of the auction, and with representatives from nine different news organizations.

The medal, accompanied by Crick’s Nobel diploma and medal presentation case, was one of 10 lots consigned by Crick’s heirs to Heritage’s two-day auction. An undisclosed portion of the proceeds from the Crick lots will be used to help promote scientific research at the new Francis Crick Institute in London, set to be completed in 2015.

Wang also paid $77,675 to acquire the canceled check Crick received for his third portion of the Nobel Prize monetary reward.

Wang was also the top bidder for Crick’s lab coat on which is emblazoned a gold spiral logo resembling a DNA molecule, winning it for $8,962.50.

On April 10, an unidentified buyer paid a record $6,059,750 at auction at Christie’s in New York for a seven-page letter Crick wrote March 19 to his 12-year-old son, Michael, who was away at boarding school. In the letter, Crick described and illustrated the DNA molecule’s double-helix structure, which was weeks away from being publicly disclosed.

Michael Crick, accompanied by his daughter, Kindra, attended both the Christie’s and Heritage auctions.

According to Christie’s, Crick’s family plans to give half of the proceeds from the sale of the DNA letter to the Salk Institute in California.

Struck in 23-karat gold, the obverse features a side portrait of Alfred Nobel with the dates of his birth and death in Roman numerals. The reverse “represents the Genius of Medicine holding an open book in her lap, collecting the water pouring out from a rock in order to quench a sick girl’s thirst,” according to the auction lot description.

Dr. Crick’s initials and surname are engraved on the reverse of his Nobel Prize medal, along with the year of the prize, 1962, presented in Roman numerals: F. H. C. CRICK/MCMLXII.

Crick’s medal had been secured in a safe deposit box in California since his widow, Odile, passed away July 5, 2007, according to Heritage officials.