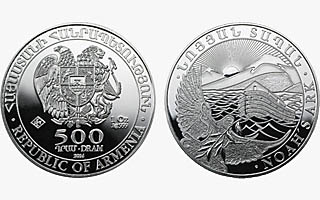 What may be one of the world’s oldest zoos, Noah’s Ark, is the centerpiece of a silver bullion program from Armenia. A German firm has coordinated the program since 2011, and seven sizes of coins are now available. The 1-ounce, 500 dram coin appears here.

What may be the most famous “zoo” in the world dates back to ancient times.

The biblical story of Noah and his ark, which in the Bible is said to have been used to house examples of all animals on Earth at the time of a great flood, recalls similar tales in other religions and across cultures of a cataclysmic flood of Earth.

Since 2011, Armenia has issued an annual silver bullion series honoring the ark, which some people believe rests on a mountain on the border of Armenia and Kurdistan.

What began as a three-coin series in 2011 (with quarter-, half- and 1-ounce sizes) was expanded in 2012 to include 5-ounce, 10-ounce, 1-kilo and 5-kilo coins, according to Scott Thompson, product manager with American Precious Metals Exchange, a distributor for the coins since early 2012.

The program is issued under the auspices of a German firm, Geiger Edelmetalle, and there appears to be no mintage limits on the coins, Thompson said.

“They have been very popular with collectors and investors,” Thompson said.

At press time, the 2014 1-ounce coins had been available for several weeks, with the remaining suite of 2014 coins becoming available in recent days.

Israel, Palau and Vatican City have also honored the story of Noah’s Ark on commemorative coins.