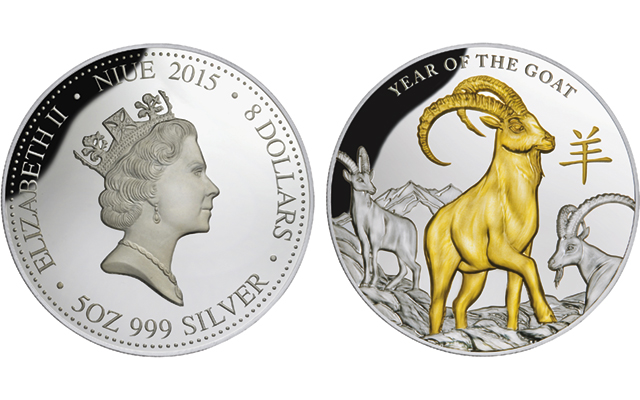 A new Proof 5-ounce .999 fine silver $8 coin from Niue marks the 2015 Year of the Goat in the Chinese lunar calendar. The coin marks the eighth sign in 12-year cycle of the Chinese calendar. 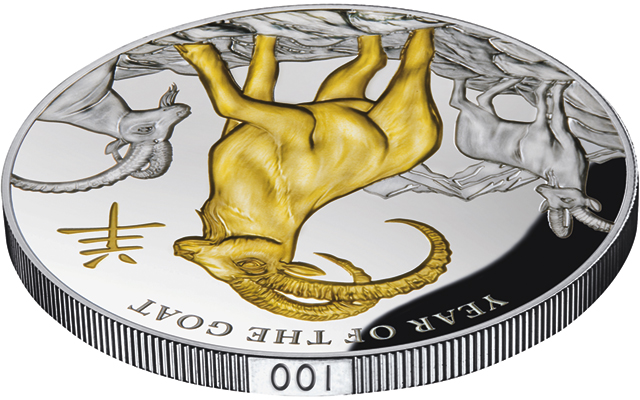 Each of the 500 Proof $8 coins is edge marked with the serial number.

The Chinese Year of the goat in 2015 is several months away, but the first coins featuring the lunar animal are being released now.

The Proof .999 fine silver coin follows the release of a 2014 coin marking the Year of the Horse, which sold out its mintage of 500 pieces.

The 2015 Year of the Goat coin is also expected to sell out.

The coin marks the eighth sign in 12-year cycle of the Chinese calendar. Tradition claims that people born in the same portion of the cycle share characteristics. Previous years of the goat (also characterized as the Year of the Ram or Sheep) include 1955, 1967, 1979, 1991 and 2003.

According to tradition, people born during a Year of the Goat are said to be sincere, sympathetic, determined but peaceful, mild-mannered and sometimes pessimistic. They are said to seek security and stability and can be very generous. A tendency to be artistic and creative is also credited to birth in this period.

The reverse of the coin shows the dominant goat or ibex in the foreground with gold plating, and two others in the background of the snowy mountain scene. The Chinese character for Year of the Goat and an English inscription also appear.

The Raphael Maklouf effigy of Queen Elizabeth II appears on the obverse of the 65-millimeter-diameter coin. Each coin is individually numbered on the edge.

The coin is presented within a high-gloss timber case and accompanied by a serial-numbered certificate of authenticity.

Downies offers the coin at the official issue price of $495 U.S. or Australian.