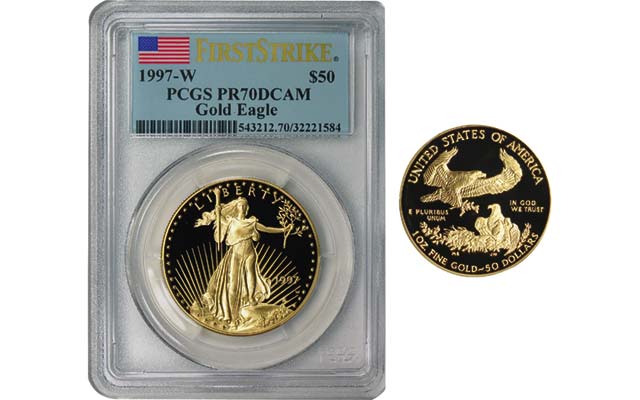 PCGS began its “First Strike” program in 2005, and today the firm provides the designation for coins released in the first 30 days of the Mint’s issue date for a coin.

While the designation is most typically seen for modern American Eagle bullion coins and commemorative issues, it can also be used on coins that pre-date the First Strike program’s start date, if the coins are submitted in the original unopened shipping box from the U.S. Mint showing a postmark date prior to the specified PCGS cutoff date.

At a May 24 GreatCollections.com auction, one of two certified PCGS Proof 70 Deep Cameo First Strike 1997-W American Eagle 1-ounce $50 gold bullion coins sold for $6,325. The coin was recently submitted to PCGS in its original sealed shipping box from the U.S. Mint.

For perspective, PCGS has graded 229 other Proof 70 Deep Cameo examples of this issue not designated First Strike, and several of these have sold between $1,700 and $1,800 in recent auctions.